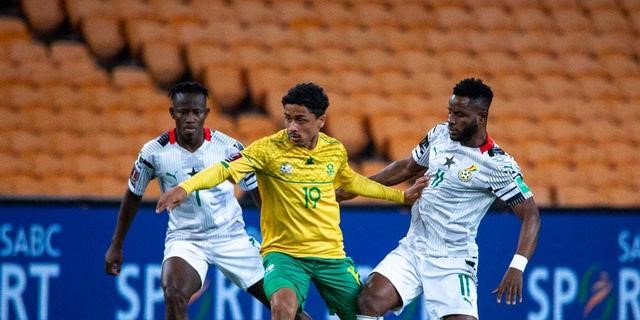 Bafana Bafana beat Ghana 1-0 in their second FIFA World Cup qualifier which was played at the FNB Stadium on Monday night.

Bongokuhle Hlongwane scored the only goal of the game from a Teboho Mokoena cross with less than 10 minutes before remaining on the clock.

As a result, Hugo Broos’ men top the group with four points from two games – and interestingly, they are yet to concede thus far.

Bafana Bafana had a shaky start to the encounter as Rushine de Reuck gave away a free-kick just outside the box.

But the resulting free-kick went straight into the arms of Ronwen Williams after five minutes.

Bafana Bafana won a free-kick as Evidence Makgopa was brought down just outside the box in the 30th-mnute.

And Mokoena’s attempt was spilled by Richard Ofori before Mothobi Mvala ballooned the rebound high and wide.

Percy Tau then had his legitimate goal incorrectly ruled for offside, and Bafana Bafana would feel hard done by the call.

Bafana Bafa had a better second half as they started knocking the ball around nicely and contained Ghana.

This was evident when Makgopa came close to breaking the deadlock 10 minutes into the second half.

Ofori again failed to collect from Mokoena’s cross but Makgopa took his eyes off the ball and failed to get a clean touch and tap the ball into the back of an empty net.

Makgopa was again presented with a chance to fire Bafana Bafana ahead after a defence-splitting pass but he took long as his eventual shot was blocked.

Hlongwane the did well to flick the ball from a corner after 60 minutes but none of Bafana Bafana players were closer to make contact with the ball.

Mothobi Mvala received the ball inside the Ghana box, and he attempted a bicycle-kick but his attempt went inches wide of Ofori’s goal.

Ofori appeared to be in pain and ready to come off in the final 15 minutes, and he would eventually be substituted as he couldn’t get on with the game.

Bafana Bafana would score in the 83rd minute when Hlongwane found the back of the net with a difficult tap-in from inside the box.

Bafana Bafana held on to their lead to record a massive win over Ghana who were strong favourites to beat the home side prior to the game.