Djokovic beats Zverev in US Open semis, on brink of history against Medvedev in final Sunday 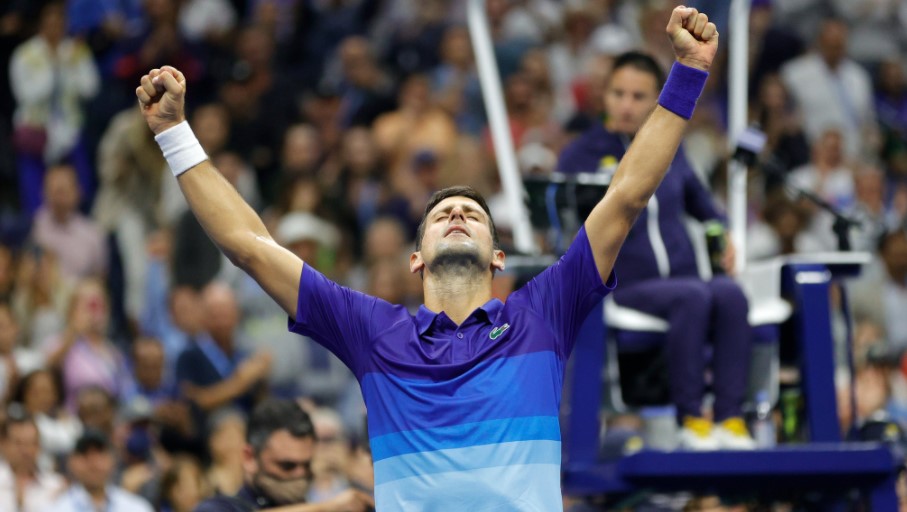 Novak Djokovic is one win away from the calendar-year Grand Slam.

Djokovic booked a spot in the US Open title match when he outlasted Alexander Zverev in five sets during semi-final action on Friday night. The world No 1 triumphed after three hours and 33 minutes.

Novak Djokovic’s dream of securing a historic calendar Grand Slam remains alive after he beat Alexander Zverev in a thrilling US Open semi-final.

The world No. 1 defeated his German rival 4-6 6-2 6-4 4-6 6-2 to qualify for Monday’s decider, where he’ll face Daniil Medvedev for the chance to go clear on top of the list of all-time men’s major winners.

Djokovic has 20 grand slam titles, alongside Roger Federer and Rafael Nadal — both of whom are missing from Flushing Meadows with injury.

The Serbian has already won the Australian Open, French Open and Wimbledon in 2021 and is trying to complete the first men’s singles calendar-year Grand Slam since Australia’s Rod Laver in 1969. He’s also hunting his fourth career US Open title.

“There is only one match left. All in. Let’s do it,” Djokovic said, when asked about his pursuit of the calendar Grand Slam.

“I will put my heart, my soul, my body, my head into winning it.”

“I’m going to treat the next match like it is the last match of my career.” Djokovic lost the first set for the fourth consecutive match but quickly bounced back to find his groove in New York.

Zverev took a 6-4 lead on Saturday morning (AEST) but it didn’t faze his opponent. Djokovic broke serve twice to win the second set 6-2 and had three set points at 5-4 in the third, with Zverev serving. Some marathon rallies ensued as Zverev saved two set points, but it was a case of third time lucky for Djokovic, who powered through to win his second set of the match.

The penultimate point of the third set, won by Zverev as he clawed back to 30-40, was a staggering 53 shots — the longest rally of the US Open and the longest point Djokovic has played at any major this year.

Djokovic looked like he had all the momentum but Zverev, desperately searching for his maiden grand slam title, wouldn’t lay down. He broke early in the fourth set and held his nerve to close it out 6-4 and send things into a decider.

The 53-shot rally was overtaken as the point of the match as Djokovic started the fifth set on fire. A lengthy rally saw the Serb bring Zverev forward with an amazing drop shot, and he capitalised on the approach with a cross-court forehand winner to seal a break and 2-0 advantage.

Even Djokovic’s wife Jelena was amazed by the quality of her husband’s play on that point. Cameras panned to her in the stands pumping her fist and turning to someone to say “Oh my god”.

Soon it was 3-0 and when Zverev butchered an easy overhead smash to get broken for the second time in the set, Djokovic was just two games away from another grand slam final.

He showed no mercy, bruising through his next service game for 5-0 before Zverev finally held serve to get on the board. A marathon seventh game of the set saw Zverev break after a handful of deuces and hopes of a miracle remained at 2-5. But he was broken very next game and that was all she wrote.

Djokovic will play Medvedev in the final on Monday morning (AEST) after the Russian beat Felix Auger-Aliassime in straight sets in the semis.