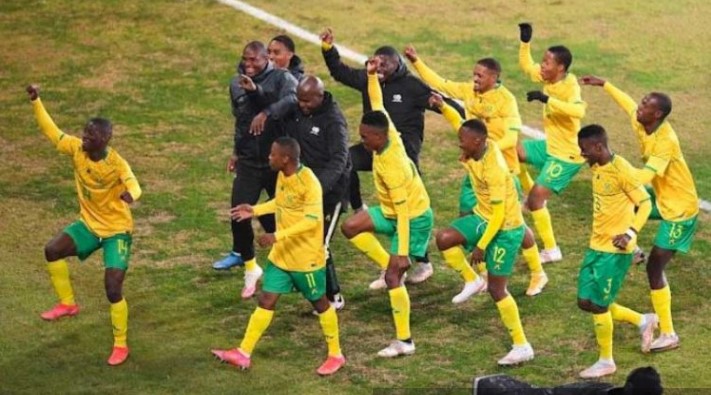 South Africa cemented their hold on top of Group G in the road to the Qatar 2022 FIFA World Cup with a 3-1 win away to Ethiopia at the Bahir Dar Stadium on Saturday.

Ethiopia had come from a goal down with Getaneh Kebede cancelling out Teboho Mokoena’s opener, but Mothobi Mvala and Evidence Makgopa scored late in the second half to hand Bafana Bafana the healthy win.

With the result, South Africa have moved to seven points, four ahead of Ghana who play later on Saturday against Zimbabwe. Ethiopia tally stopped at 3 points.

South Africa keeper Ronwen Williams kept his side in the game with good saves in the first half. In the 25th minute he leapt high to smoother Surafel Dagnachew’s shot behind for a corner.

He denied Abubeker Nasir Ahmed twice in succession one on one in the 36th and 39th minutes, the striker having been put through with peach-perfect passes.

At the stroke of halftime, the South Africans got into the lead somehow thanks to a Fasil Gebremichael howler. The keeper appeared to have gathered Mokoena’s freekick cleanly in his arms but somehow let the ball slip into the net.

In the second half Ethiopia pushed to get themselves back in contention and they got back into the game in the 67th minute when Kebedeh struck a superb freekick into the net after Dagnachew was brought down by Kutumela Thabiso.

But the joy of an equalizer lasted only five minutes as South Africa got back into the lead, Mvala volleying the ball home from close range after a long throw was flicked to his direction.

South Africa could have added a third in the 82nd minute but Makgopa’s header came off the bar.

Makgopa however got his goal in the second minute of added time with a lob over the keeper after being put through by Hlongwane Bongokuhle.

Elsewhere, Guinea and Sudan played out to a second consecutive draw after they produced a 2-2 result in Group I Matchday Four fixture played in Marrakech.

Amir Kamal scored the equalizer for the Sudanese in the 88th minute, the two sides splitting points once again just as they did when they met in the first leg on Wednesday.

The Guineans had chances in the opening half with Jose Kante being denied by the keeper one on one while Naby Keita had a shot from distance also saved.

Sudan however drew level in the 63rd minute when substitute Ahmad Mahmoud swept the ball home from inside the box.

Guinea however took the lead again three minutes later through Bayo who kept his cool to finish low past the keeper after being put through on goal.

Despite going down again, Sudan kept fighting and they got their point with just two minutes left, Kamal equalizing.