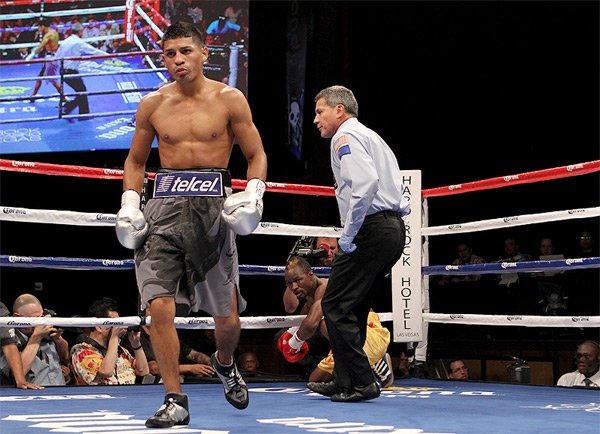 Abner Mares and Joseph Agbeko fought on August 13 to determine the Showtime Bantamweight Champion. Mares won a majority decision, but the focus is not on the winner—it’s on referee Russell Mora, who gave one of the worst nights of officiating in recent memory.

Mora became the subject of the post-fight discussion, and his low-blow knockdown ruling in Round 11 was more than enough for commentator Al Bernstein to say it was one of the worst jobs of officiating he had seen in the past 15 years.

Mares, who has a history of throwing low blows, appeared to have hit Agbeko more than a dozen times low. To no warning by the referee, Agbeko had no choice but to fight two opponents instead of one.

These are the five worst referee jobs in the past 10 years in boxing.

Referee Marlon Wright gives the modern day Tunney-Dempsey long count after Librado Andrade puts Lucian Bute down on the canvas in the final seconds of round 12.

Wright started the count, but halted it to warn Andrade for getting out of the neutral corner. Bute appeared to get up before the referee could finish the count, but he was down for at least 10 seconds. The referee finished the count after 20 seconds had already passed.

Bute would go on to win a unanimous decision and retain his undefeated record.

No. 4: Joe Cortez Disqualifies Humberto Soto After Knocking Down Opponent

Referee Joe Cortez has had his fair share of controversial bouts. In this one, he disqualifies Humberto Soto for hitting Francisco Lorenzo on the back of the head in what should have been a TKO win for Soto.

The bloodied and beaten Lorenzo was about to go down before Cortez jumped in to break up the fighters before the knockdown occurred. After Lorenzo finally went down, Soto landed a grazing blow on the back of his head.

Cortez’s reasoning for the low blow can be heard here.

He was inducted into the Boxing Hall-of-Fame this year along with Mike Tyson, Julio Cesar Chavez and Sylvester Stallone.

No. 3: Referee Warns Robin Reid for Punching Sven Ottke in the Face

In this bout from 2003, Robin Reid’s 10-fight win streak would come to an end after referee Roger Tillerman made more than one mistake before the night was over. Sven Ottke won a unanimous decision, but not without the help of Tillerman.

Reid knocked down his opponent in Round 6. Tillerman ruled it a slip. Soon after, Reid had a point deducted for supposedly head-butting Ottke. It was clear the punches of Reid were landing and not his head.

Two knockdowns were scored in the bout for the Mexican boxer, and they both bring controversy along with numerous low blows for referee Russell Mora.

“I don’t help the fighters,” Mora said in response to whether or not Mares would have won without his help. “I enforce the rules. First and foremost, I have to enforce the rules. Those punches were on the beltline. It’s a fair punch. I have to call it fair. It’d be unfair to give the advantage to the other guy just because he says it low.”

Showtime commentator Al Bernstein called it one of the worst jobs of officiating he has seen in the last 15 years.

No. 1: Referee Rules Low Blows and Slips as Knockdowns in Williams-Airich Bout

Referee Alfredo Garcia Perez put on one of the worst nights of officiating in a 2008 heavyweight bout between Danny Williams and Konstantin Airich.

Williams had two points deducted in Round 2 for low blows. He also received two standing eight counts in Round 3 and Round 4 after slipping and stumbling out of the ropes. Williams was deducted a point in Round 5 for hitting after the break.

Airich got counted in Round 5 for losing his balance and falling down.

Round 6 only lasted a minute and a half as Airich’s promoter prematurely rung the bell after his fighter was knocked down.

Williams would eventually win by TKO in Round 7, but the referee was the story of the fight. I can only imagine what the scorecards looked like.