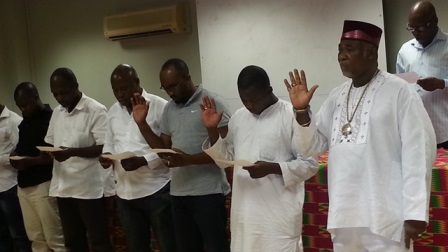 The astute businessman has vowed to expand the popularity, interest and participation in the two water sports body he assumed leadership of from Hon. Tackie-Komme effective June 13, 2014.

Accra based business tycoon and renowned boxing promoter, Francis Decland has begun a 4-year mandate as the President of the Ghana Rowing and Canoeing Association (GRCA) with a promise to revive the sport and power Ghana to medals at the Rio 2016 Olympic Games.

“Both rowing and canoeing are lesser known sports but we are determined to help them rise. People perceive it to be elite sports but it’s very common in Europe and East Africa and we want to promote it become popular in Ghana,” Mr. Decalnd told Allsports.com.gh exclusively.

The man popularly called Obric Sala due to his boxing promotions yndicate which organized some of the biggets boxing events in this country’s history back in the day took over the top post following elections at the Congress of the association on Friday, 13th June in Accra which elected new executives to run the affairs of the GRCA for a four year term.

Presided over by the hitherto incumbent President of GRCA, Hon. Jonathan Tackie-Komme, a former Member of Parliament of Odododiodio constituency, Francis Decland polled 13 votes against the seven of Hon. Tackie-Komme to become the new chief of rowing and canoeing in Ghana.

Confessing amid hailing himself a true sportsman and a democrat, Hon. Jonathan Tackie-Komme conceded defeat and congratulated the victor and helped oversee the new Board swear the Oath of Office administered by Mr.  Hamid Issaka, PRO of the National Sports Council.

“We are determined to work hard and I can assure you that it won’t take long for Ghanaians to embrace this lesser financed sport, we’ll work hard towards this. We’ll do our best to make it a popular sport in this country,” Mr. Decland pledged.

“I want to inculcate this sports into Ghanaians and recruit more talents because we have seas, rivers and lakes all over the country where many have the basic skills of paddling required to compete in the sports. We believe we will be ready to win gold medals at the next Olympic Games,” the Ghana Rowing and Canoeing chief added.