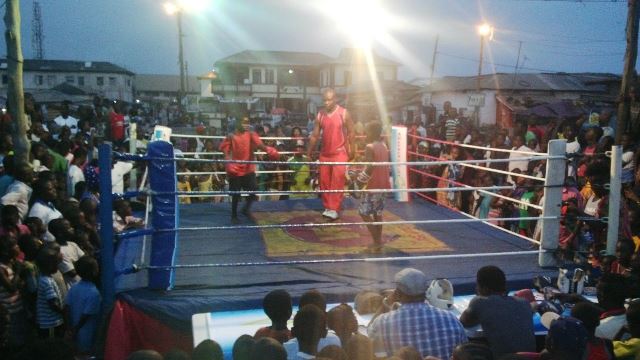 The President of Ghana Boxing Authority (GBA), Peter Zwennes has gladly endorsed the Goldstar Airlines sponsored boxing talent hunt which saw its third episode bell off to another resounding success at Chorkor Lante Maame in Accra.

As usual, a vast array of fighters aged between 12 and 16 were there in their numbers to display the pugilistic skills with almost twenty boxers selected in the end as the drive to hone their skills into future world beaters continues.

“Yes it’s a very innovative idea and we support it completely, this is the right approach to capture talents and we are glad it’s happening in Ghana boxing. It teaches boxers skills at young ages which will improve and become excellent as they grow,” Mr. Zwennes told Allsports.com.gh at ringside.

It was the first time the chief of the fistic sport in this country had attended the 3-episode old talent hunt and recruitment led by former boxer, Napoleon Tagoe’s Will Power Boxing gym.

Sponsored by indigenous airline, Goldstar Airlines who albeit are yet to even begin full operations, Mr. Zwennes is also urging the organisers to maintain it because the future gains could be enormous.

“We congratulate Goldstar Airlines and Will Power Gym for this great initiative and we pledge the GBA’s continued support and encouragement. We are hoping that the

programme is not stopped midway and runs to every corner of this country as promised,” the GBA boss opined.

Also present to catch a first hand glimpse of the talents was US boxing promoter, George Johnson, a partner of Goldstar Airlines who expressed awe at the wide array of young talents exhibited at the boxing fiesta in Chorkor.

“I’m extremely shocked but excited with the talents and enthusiasm displayed here by these young boxers. I can stick my hand up for this project that in five years many of these boys could be fighting for world titles,” said Mr. Johnson who is expected to take selected boxers to the US for further training and grooming.

“I came here for a first hand look at the programme and I must confess my expectations have been over-met. I can’t believe this many good boxers of such young ages in one single place. It’s almost unbelievable and I think we are watching many future world champions,” George Johnson added.