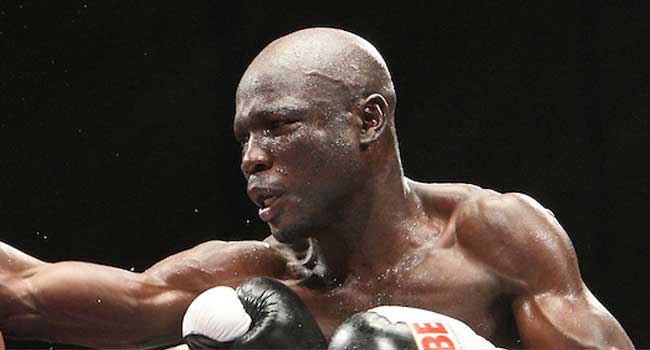 Former WBC International Featherweight champion, Osumanu Akaba took on Edner Cherry AKA Cherry Bomb in his second fight in the United States of America on Saturday hoping to relaunch his bid to realise the childhood dream to be a boxing world champion.

34 year old Akaba had lost his maiden fight in the US to Bahodir Mamadjonov of Uzbekistan on August 22 at the Lifestyle Pavilion, Columbus, Ohio, a unanimous decision after 8 rounds.

It was not the same story Saturday night at the 2300 Arena in Philadelphia, Pennsylvania however when Akaba faced off with IBF number 11 and WBC number 5 contender, Edner Cherry in a scheduled 10-round junior lightweight contest.

The two boxers at weigh in before fight

32 year old Cherry (now 33-6-2, 18 KOs), a former WBC Light Welterweight challenger was up in his armoury, destroying the Ghanaian despite what appeared to be an even contest in the first round. Edner dropped Osumanu Akaba, (now 24-7, 19 KOs), three times in round two, and won by TKO at 2:15 of that round.

Watch Akaba’s defeat to Ender in the video above.