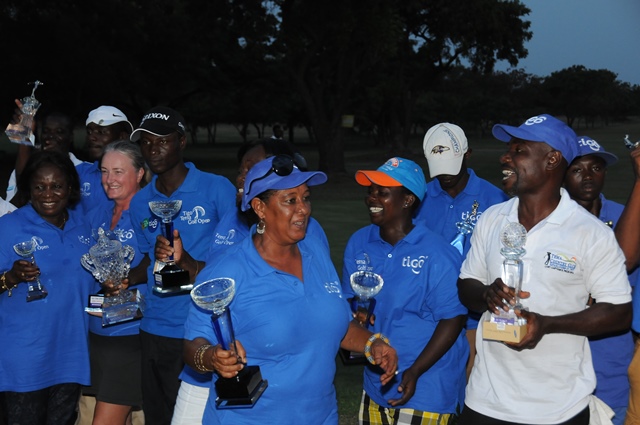 Peter Amenyoh retained golf’s Tigo Tema Open title on Sunday but without sweat as eventual runner-up, M. Owusu Bonsu pushed him all the way to the very end.

Amenyo who first won this title last year withstood everything thrown at him though, topping the 2014 standings with a combined score of 144 gross playing over two days, a shot ahead of the indefatigable Owusu Bonsu in the men’s scratch event.

In the event, Amenyo who earlier this year participated at the world amateur golfers tournament in Japan, was the topmost beneficiary of sponsors, Tigo’s massive giveaways to all winners on the day at the Tema Country Golf Club.

This year’s tournament marked 11 years of the communication giants’ sponsorship of the flagship competition at one of Ghana’s leading golf clubs and Tigo left no one in doubt of their commitment to the club and tournament. All winners received a mobile phone with a year’s talk time to boot along with trophies and other Tigo souvenirs.

“We want you our dedicated subscribers to enjoy the best services. We are committed to providing world class communication service but we are also committed to Tema Golf Club,” Jesse Agyapong, Tigo Head of Marketing added.

For emerging the overall champion, Peter Amenyo went home with a huge trophy and Samsung S5 phone fully serviced with GH¢200 Tigo airtime every month and unlimited internet bundle for one year.

Runner-up, Owusu Bonsu also got a trophy and Samsung S4 phone with GH¢150 Tigo airtime every month and unlimited internet bundle for one year.

Good old Mona Captan Myles-Lamptey was the ladies champion again after teeing to 178 gross in the scratch event, beating the challenge of young Jessica Tei who had to make do with second place yet again, just one shot behind at 179 gross over two days.

In the Handicap events, King B. Victor won the Men’s division after returning a net score of 139 playing over two days. Runner-up was Godwin Asem (141 net), Teye Lartey finished 3rd (142 net) beating E.J. Ocansey on countback whilst G. Basonege ended the 36-hole tournament 5th on a return of 143 net.

K.A. Ayitey who got the most cheers as they chanted his nickname Ayitey Powers all afternoon long, won the Men ‘B’ division on 124 net beating Agbo Albert who finished second by 13 shots whilst J. Cofie finished third a further five shots back on net 142.

Tigo also gave away phones with fully loaded credits for the next 12 months to auxiliary prize winners, for closest to the pin and longest drive.

“Professionals, amateurs, juniors have all played this week thanks to Tigo. We appreciate your support and urge you to continue to support us,” Mr. Hammond said.