Nigeria crash out, fail to qualify for AFCON 2015 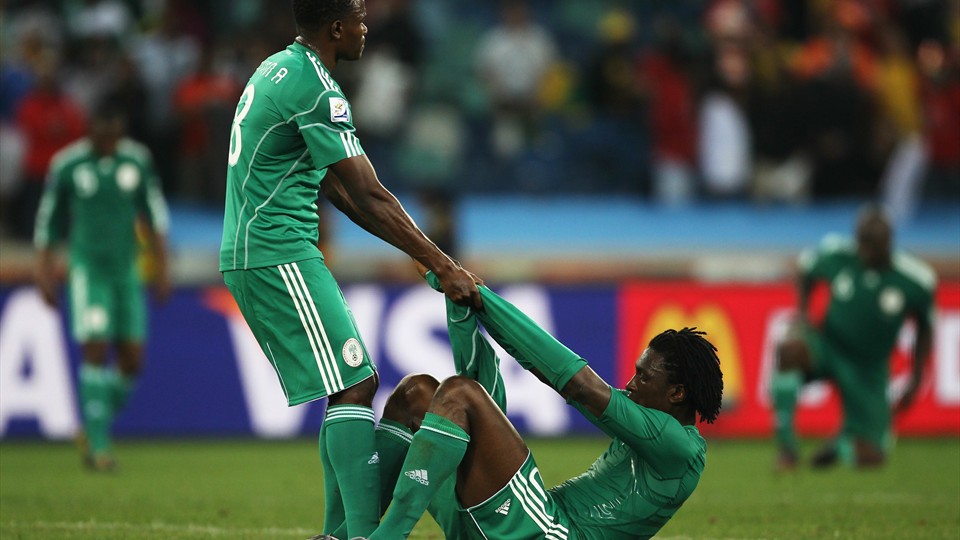 It’s 1996 all over again for the Super Eagles who will not be at the tournament to defend their title for the second straight tournament after being crowned champions of Africa.

Nigeria have been knocked out of the 2015 Africa Cup of Nations after the Super Eagles could only draw 2-2 at home against 10-man South Africa, falling 1-2 at the newly built Akwa Ibom Stadium in Uyo, Akwa Ibom on the final day of qualifiers to Africa’s biggest football tournament.

Bafana Bafana rounded up a perfect qualification bid that saw them go unbeaten and surely puts behind teh rainbow nation the shock of losing first choice goalkeeper and captain, Senzo Meyiwa through a brutal murder at the height of the qualifiers.

4 matches Senzo had gone without conceding a goal and even though his former teammates did concede in both of the remaining two qualifiers since his untimely death, Bafana Bafana secured two priceless results that sealed top spot and more importantly, a convincing result on the home soil of their bogey side.

Nigeria who had to come from two goals down at home before eventually finding the equaliser in injury time, will miss out on defending the trophy they won in South Africa last year after finishing on eight points which is not good enough to even compete for a bets third placed team spot.

Congo who defeated the Super Eagles 3-2 in Nigeria on the opening qualifying day but lost 0-2 at home only last Saturday to dent their own qualification hopes and resurrect Nigeria’s fortunes, took full advantage and strolled to a 1-0 win in Sudan which proved decisive for Claude Leroy’s side.

The result means that all but one of the 16 places at next year’s tournament billed for Equatorial have been notched except the last spot for the best third placed team which appear to be DR Congo at the minute based on their nine points in Group D.

only 7-time champions, Egypt stand a chance of upstaging the DR Congolese if they can win by two or more goals in Tunisia this evening in the final match to round up Africa’s 2015 qualifiers.