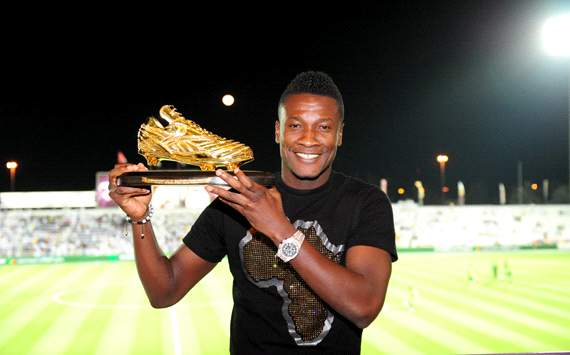 Gyan has been labelled a beast by Sarah Kwabla's mother

Asamoah Gyan has indicated that his records are clear enough to earn him the CAF African Footballer of the year 2014.

The 29-year-old has been shortlisted among 5 players who will be vying the most valuable player on the African Continent and he thinks that the award should go in his favour per what he has achieved within the year under review.

“I have been breaking a lot of records and that shows I deserve to be named the African Footballer of the year. I was the top scorer on the African continent during the World qualifiers and in the tournament proper I managed to break Roger Milla’s record as the African top scorer of all-time in FIFA World Cup history.

In relation to this Gyan has rubbished people’s assertion that he would be denied the African Footballer of the year because he plays in a low profile league.

“People thought my form would dip because I am playing in UAE, but that is not the case, because I always rise to the occasion when it matters most, like the World Cup.

“I don’t think playing in UAE shouldn’t prevent me from winning the CAF African Player of the year, due to what I have achieved in the course of the year under review and this will depend on how the voting would go,” he added.