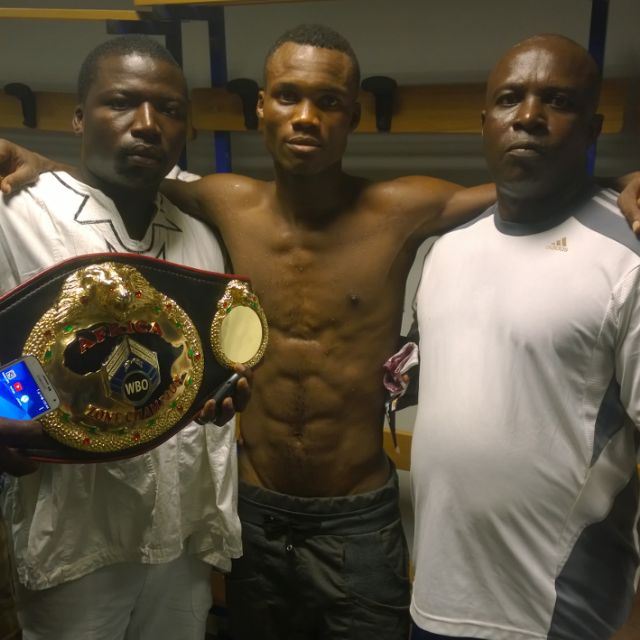 George ‘Red Tiger’ Ashie is the new WBO Africa Interim Lightweight champion after claiming a 6th round knockout victory over Allan Kamote of Tanzania in Accra on Friday night.

The former Africa Boxing Union and Commonwealth Lightweight champion has vowed to still realise his world title dreams beginning with the fight against Kamote, his first in over 20 months.

And true to his words, Ashie was on hand to inflict endless pain on Universal Boxing Organisation (UBO) woild Lightweight champion, Kamote so much the Tanzanian contemplated qutting on his stool even before the ill-fated 6th round.

Ashie easily won every round including sending Kamote to the canvas in round 4 even though the Tanzanian will beat the count in the main event of McDon Promotions maiden bill codenamed ‘Fist of Fury.’

Afterwards, Ashie reiterated his desire to march on to bigger fights in 2015 and edge closer to the world championship within the next two years.

“This fight was a good fight but my opponent was not as strong as I expected, I want to thank my team and McDon for putting this fight together,” Ashie said at ringside right after being decorated with the title by boxing legend, Azumah Nelson.

“It’s been good, my aim now is to keep training and try as much as possible to get a world title in 2016. It’s a target I will achieve no matter how hard it comes,” Red Tiger added.

In other fights on the undercard, Ghana and West Africa Bantamweight champion, Emmanuel Quartey AKA Akufo Addo made mince meat of Emmanuel Laryea whom he knocked out in the opening round of their scheduled 8-round contest.

Highly rated, Maxwell Amponsah of the stable of GBA President, Peter Zwennes was given a rude awakening after he was also stopped in round one by a ferocious right hook of Ebenezer ‘Uppercut’ Tetteh whilst Prince Octopus Djanie also claimed victory over Michael Barnor.