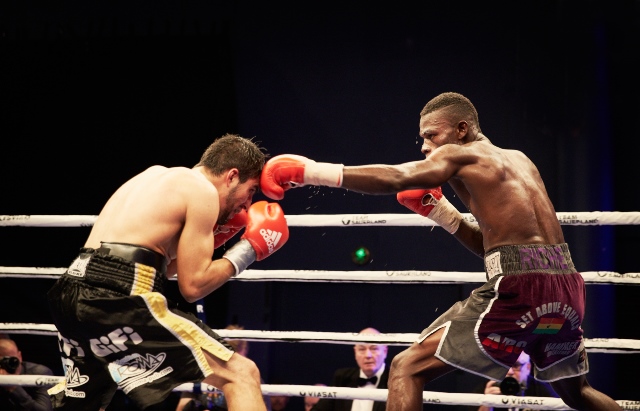 Commey landsblow on head of Ziani

Commey landsblow on head of Ziani

Richard Oblitey Commey continued the perfect start to his professional career following a unanimous points victory against France Super Featherweight champion, Samir Ziani on the Nordic Fight Night at the Albertslund MusikTeatret in Copenhagen on Saturday.

It’s the second straight fight without a knockout for Commey who began his career with 17 straight knockouts, but it was another victory for the man who now improves to 19 victories from 19 professional fights with 17 knockouts to boot.

Under the supervision of referee Per Hansen, Judge 1, Berit Andreasen scored it 96-94, Judge 2, Jan Christensen ruled it 96-94 whilst Judge 3, Hans Larsen judged it 97-93, all in favour of Commonwealth Lightweight champion, Richard Commey after 10 rounds of boxing.

“By the grace of God team COMMEY won the fight on points. We thank all of you,” Commey’s coach, Carl Lokko posted on Facebook shortly after the verdict.

Ghana Boxing Authority Committee member, Yoofi Boham who has witnessed the rise of Commey to this stage of his career, was even more ecstatic.

“I am short of words not knowing how to express my happiness and joy for this win over such a formidable guy. In fact, I am highly elated, feel highly honoured and seeing myself moving full chest out,” Mr. Boham said in a message to Michael Amoo-Bediako, manager of Commey.

“I can imagine your ecstasy by the ring side on hearing the verdict – resounding scores of 2 judges each scoring 96-94 and the other having it 97-93. Baravo to Richie and Carl,” Yoofi Boham added.