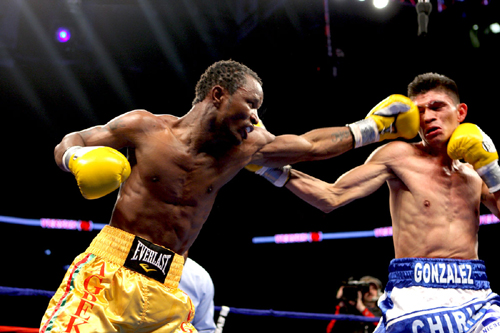 Joseph King Kong Agbeko will get another chance to put himself back in the ratings for prospective world title crack again when his Fresh King Entertainment stage the IBF Junior Featherweight championship against Marlon Tapales of Philippines in Accra on March 15 next year.

who last fought in Accra back in March 2013 to launch Fresh King Entertainment is expected to square up to 22 year old Filipino southpaw, Tapalles nicknamed Maranding Nightmare (26-2, 9 KOs) who is the WBO Asia Pacific Bantamweight champion.

“The bout is scheduled for March 5, 2015 in Accra, Ghana.  Formal sanction will be granted when we get the sanction fees​,” Lindsey Tucket added.

He concluded: “Once we receive the sanction fees, IBF President Daryl Peoples or I will contact you regarding the names of the officials. If you have any questions feel free to contact me at the IBF/USBA office”