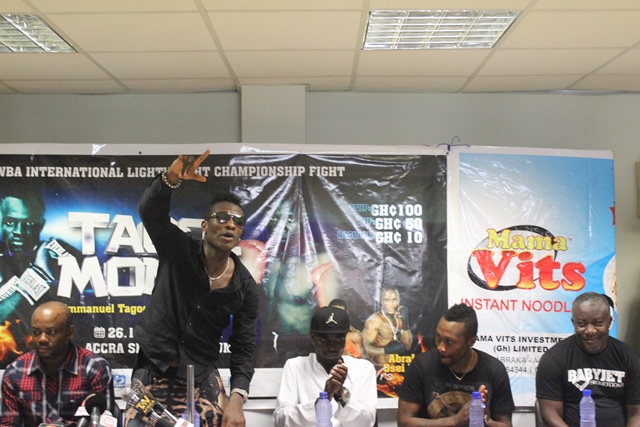 Captain of the Black Stars Asamoah Gyan who is on Christmas holidays in Ghana has commended the local media for promoting sporting disciplines and sports performers.

Speaking at a Press Conference organized by Baby Jet Promotions at the Accra Sports Stadium for the Boxing Day Bonanza, Gyan who rode straight from the airport to the conference after touching down from the United Arab Emirates said the Ghanaian Media have helped him a lot in his career as a sports man and now skipper of the national soccer team of Ghana.

He said formerly he did not understand the sports journalists, but now he respects them a lot and  has urged all sportsmen and women to hold journalists in high esteem.

He told the press that apart from football, he loves boxing and wants to contribute to the development and promotion of the fistic sport, that is why he chose to support Emmanuel Tagoe aka Game Boy.

According to Gyan, Baby Jet who are sponsored by Vits Noodles have come to stay in boxing and they are going to promote the best boxers from Bukom and anywhere in Ghana where the finest prize fighters can be discovered.

Bonaza can never be missed and called on all boxing lovers to troop to the Accra Sports Stadium to celebrate the Christmas in style as the stylist Tagoe has a wonderful show to put up.

The “Game Boy” can boast of 22 fights, 9 knockouts, a loss and no draw and has promised to give Ghanaians a special Christmas bonus on the day.

His opponent Sidiki Momba, who hails from Tanzania and resides in Dar-Es-Salaam, has 18 fights, 6 knockouts, 5 losses and 2 draws.

Ticket prices for the bout on December 26 are already out with ringside tickets going for 50 Ghana cedis and regular pegged at 10 Ghana cedis.Meanwhile coach Emmanuel Tagoe who handles Emmanuel Tagoe and Braimah Kamoko aka Bukom Banku says he wants to be recognized by the Sports Media as the best trainer and rewarded.