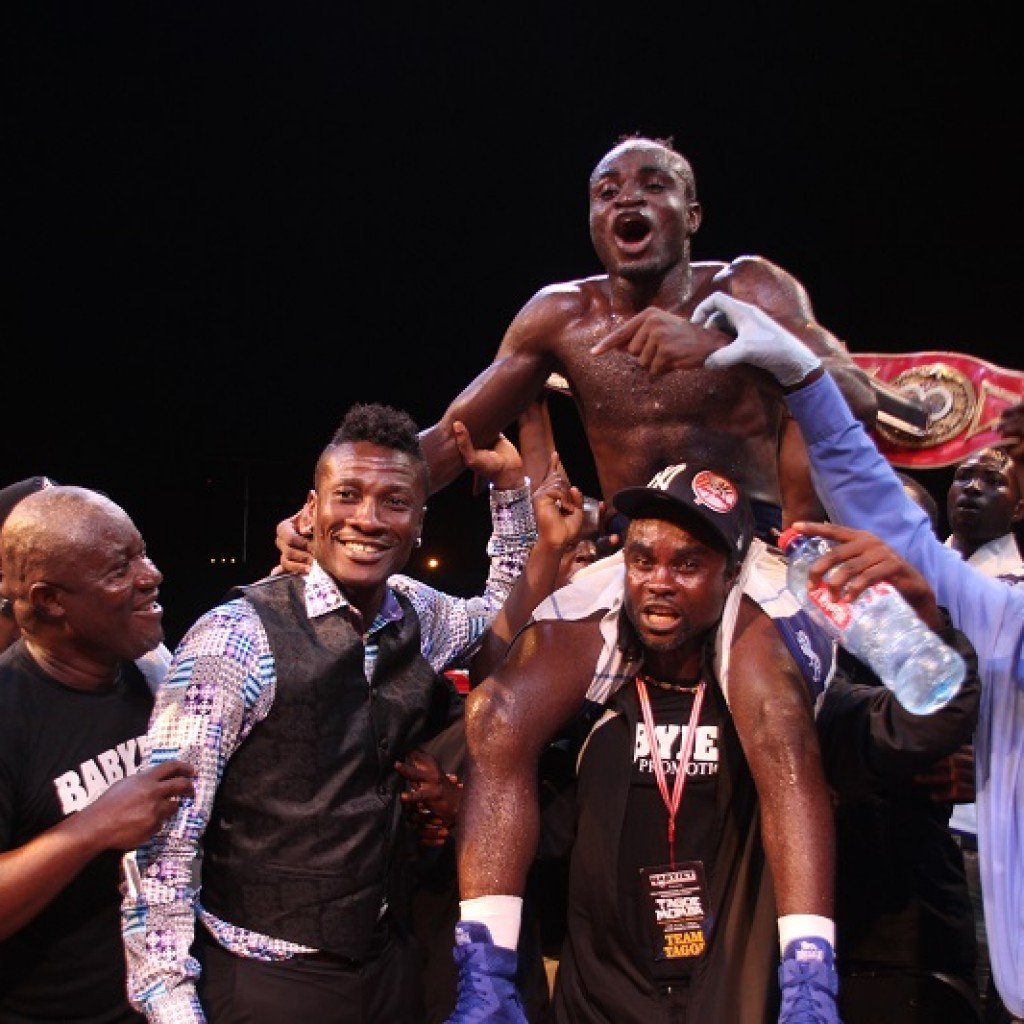 It was an anti-climax at the Accra Sports Stadium in the early hours of Saturday as Emmanuel Tagoe earned a 6th round stoppage victory over Sadiki Momba of Tanzania to win the WBA Intercontinental Lightweight championship in the headline bout of Ghana captain, Asamoah Gyan’s BabyJet Promotions bill codenamed ‘Who rules the ring?’

Momba had sworn to beat Tagoe in front of his own home fans and had talked tough since arriving in Ghana but when his moment came in the ring, the Tanzanian failed miserably to back his words with action as he was thoroughly dominated before he gave up in round 6 with what appeared to be a shoulder injury.

It nevertheless did not dissuade Tagoe (who improves to 23-1, 19 KOs) from celebrating the victory amid hailing his perfect formulae for success.

“He’s good so I had to take my time, I wanted to entertain the fans too even though I promised the media that I will stop him. I did not tell anybody when I will knock him out but here you have it,” an elated Tagoe said in the ring right after the fight.

Afterwards, the world title chasing Tagoe immediately threw a challenge to local rival, George Ashie to a rematch of their epic 2012 bout which Tagoe won but Ashie ahs never accepted the verdict.

“I am ready to give George Ashie a rematch because I will beat him again. This time I am ready for him again, if he’s ready I am ready to fight him on May 9,” Emmanuel Tagoe said.

Ashie who was at ringside to watch the fight wasted no time at all in making his way up into the ring to state his case.

“To me, May 9 is too long. If you are really serious and wants this rematch then let’s make it happen much earlier. I think 6th March will be perfect,” Ashie responded setting the stage for another potential big fight in Accra next year.

In other fights on the undercard of ‘Who rules the ring?’ Michael Ansah AKA One Bullet defied the odds even after sustaining a cut in round 3 to outwit Ishmael Aryeetey on unanimous points whilst Raymond Commey defeated Kenyan, Nick Otieno to win the WBA Pan-Africa Super Bantamweight championship.