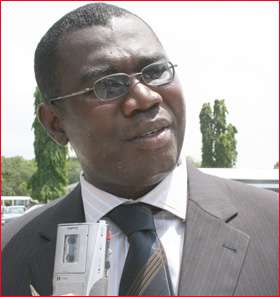 Council for Kumasi base King Faisal, Lawyer Egbert Faibille has declared that his client will file a contempt charge against the Ghana Football Association for disrespecting the court.

Three months ago, King Faisal filed a lawsuit against the Ghana Football Association stopping the association from organising its annual congress.

But on 22nd December, 2014, an Accra Human Right Court gave the Ghana Football Association the green light to organise its congress subject to an under-taking the FA must signed.

Immediately after the court ruling, the Ghana Football Association met and proposed 30th December, 2014 as the date for the congress which was held peacefully at the Ghanaman Soccer of Excellence in Prampram which automatically ushers in the new season (2014/15 league season).

However, the lawyer for Kumasi King Faisal has strongly rejected the Ghana Football Association’s decision to organising its congress.

Lawyer Egbert Faibille believes that the case before the court has not ended and the FA has no legal right to go to congress and also to organise the 2014/15 league.

“The case before the court has not ended and why did the GFA went ahead to organised the congress and also to play the league? We are awaiting for the court decision on the interlocutory injunction we filed, why is the GFA disregarding the court on the tendency of the perpetual injunction released on the writ of summons and by the FA’s own conduct they have shown that they respect the court so the FA going to congress clearly shows that they are in contempt and I have written to them (GFA) that their actions will bring problems to them,’’ he told Asempa FM.

Lawyer Faibille went ahead and revealed that by next week Monday, King Faisal will file an application of contempt against the Ghana Football Association.

“Latest by Monday, we will file an application against the Ghana Football Association and we will mention the name of the FA president, Kwesi Nyantakyi, the names of the Executive committee members and the names of the FA’s Emergency committee for disrespecting the court,’’  he said.