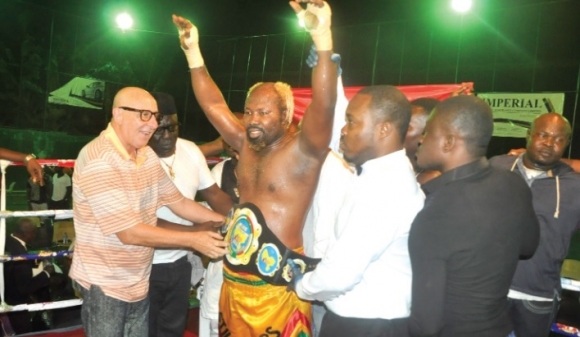 Powers is decorated by Harry Zakkour

Powers who surprisingly came into the ring led by age-long rival, Bukom Banku (Braimah Kamoko) dominated the fight before knocking out Amoussou in round 5 of their scheduled 10-rounder for the West Africa Boxing Union (WABU) title.

Powers and Banku sparring before fight

It was a first victory for Powers since he defeated Musah Abubakari in Accra on June 1, 2012, a stretch that saw him lose all seven fights during the span, four of them in Australia as well as another against reigning Commonwealth Super Middleweight champion, Isaac Ekpo in Benin.

Last Saturday’s fight was however a victorious one as Powers powered to the West Africa title under the tutelage of buddy Bukom Banku, the same man to whom Powers lost his last fight, a sellout in Accra on May 15 last year.

“Bukom Banku trained me for this fight and he was a very good coach this evening and I thank him for his support which was important for my victory this evening,” an elated Powers said after the fight.

“I thank God for such a good start to the year and I am looking forward to more fights in 2015 because I still want to go for the world title. I thank my fans for their support, they should keep on praying for me and I will bring the world title,” he added.

In other fights on the Landmark Promotions and Management bill codenamed ‘Return of the Dragon,’ Emmanuel Omari Danso AKA Kwahu Tyson stopped Bassil Osigwe of Nigeria after only 78 seconds of their Light Heavyweight contest.

World title chasing Kwahu Tyson proved too strong for Osigwe who failed to beat the referees’ count at just one minute, 18 seconds of the very first round.

Powers is decorated by Harry Zakkour

Also victorious on Saturday night was Habib Ahmed who scored a unanimous points victory over Atooli Moore in a Super Middleweight contest, whilst Success Tetteh successfully saw off the challenge of Alfred Quaye in their bantamweight clash.

An 8-round international Super Bantamweight contest between young but brave Isaac Sackey of Ghana and Fatiou Fassinou of Benin was scored a majority draw, same as a Lightweight contest featuring Ben Lamptey versus Justin Savi of Benin which also ended a draw.