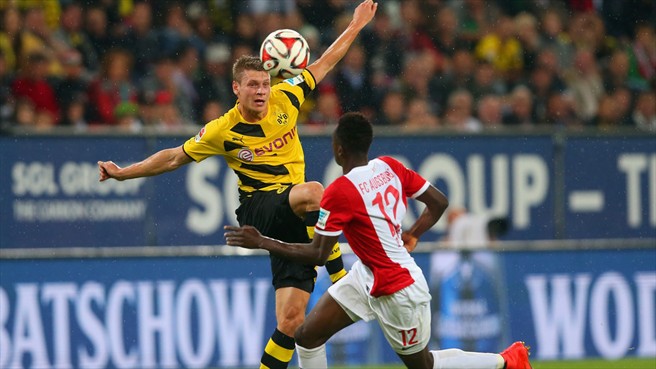 The North Rhine-Westphalia club who were runners up last season have had their worst run in recent times lying last-but-one on the 18-club league and are looking for reinforcements to succour the club.

AS Roma and Bayern Munich have been named as potential suitors but according to Bild, Jurgen Klopp is the latest manager to be interested in Baba Rahman. As awkward as it would sound for the 20-year to leave a 6 ranked club to the last-but-one club in January, he is also not permitted by German football rules to play for a third club in the space of one year having already featured for both Greuther Feurth and Augsburg.

Dortmund are aware it is impossible to get Augsburg to part with Rahman in January but will still look to agree a deal and snap him up in June if they succeed in escaping relegation.

Dortmund on their part are encouraged in Rahman’s pursuit as a result of their close ties with Ausburg who acquired Asamoah Gyan’s former playmate at Sunderland, South Korean Ji Dong-Won, only to relay him to Dortmund last summer on a free transfer after just 6 months.

The former Asante Kotoko defender has seen his stock rise following his move to Germany and is now valued at €3m, a figure Dortmund would like to cater for by using the Ji Dong-Won who has struggled to nail down a position, as make-weight for the deal.

Jurgen Klopp’s side believe the highly-rated Rahman who will be making Ghana’s team to the Africa Cup of Nations in Equatorial Guinea, is the perfect whip to crack at the unimpressive Erik Durm and Marcel Schmelzer at Dortmund’s left-back position.