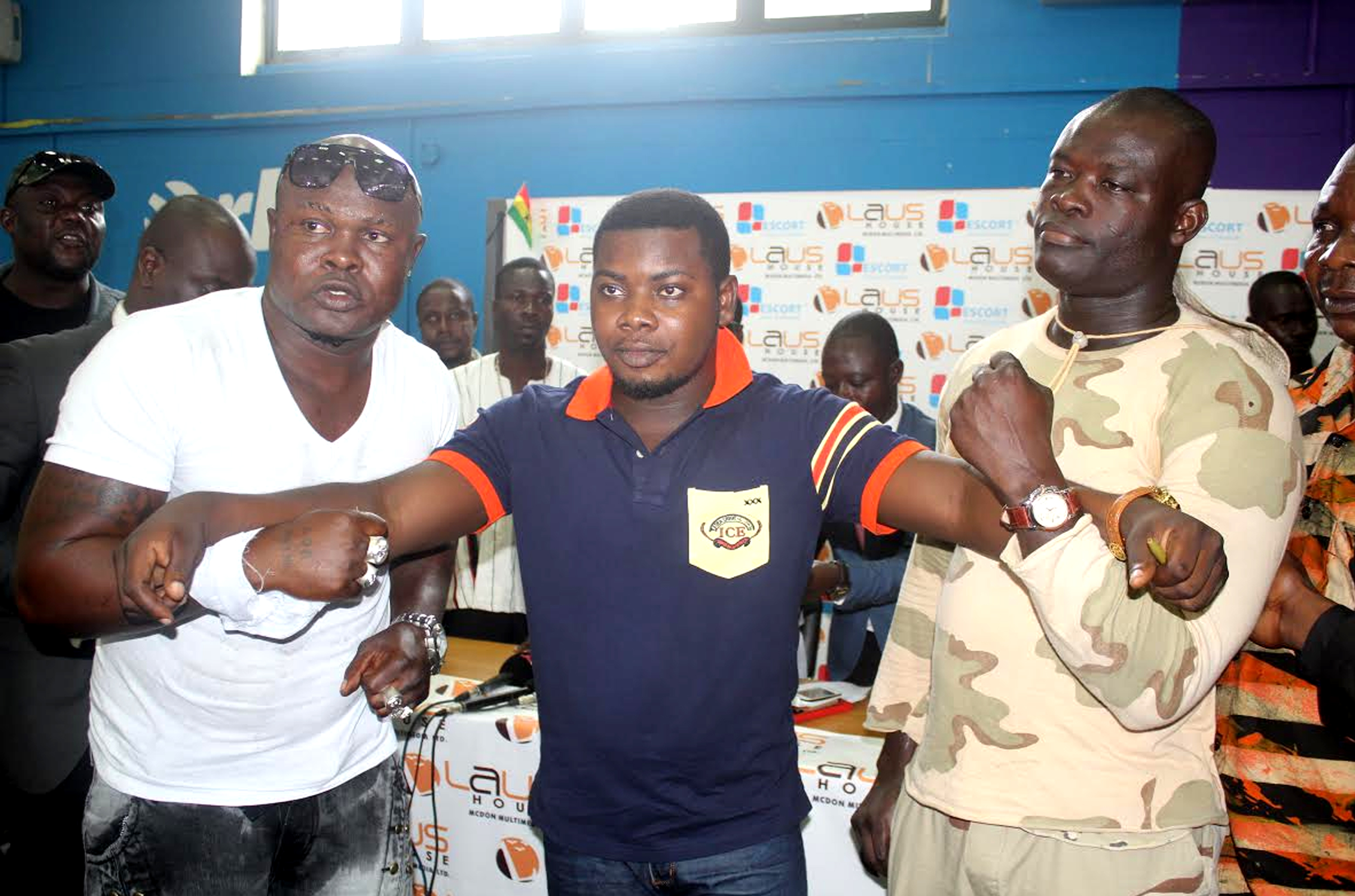 McDon Atitsogbe, CEO of McDon Multimedia Promotions is in big trouble with the Ghana Police Service after the Ghana Boxing Authority (GBA) reported him for failing to pay boxers and ring officials as required after his syndicate staged the fight night dubbed ‘Fist of Fury’ back at the end of last year.

George Ashie defeated Tanzanian, Allan Kamote to win the WBO Africa Lightweight belt in the headline bout but according to a GBA press release issued in Accra this afternoon, Mr. Atitsogbe has gone AWOL after the fight whilst cheques he issued for payment of fees and purses of boxers and others were all returned uncleared at the bank.

McDon with Allan Kamote when George Ashie’s opponent arrived at the Kotoka International Airport ahead of the December 5, 2014 fight

Aside reporting him to the office of the law, the McDon Promotions boss has also been suspended indefinitely by the GBA.

“The Ghana Boxing Authority had lodged a formal complaint to the Police against one of its licencees, Mr. McDon Atitsogbe of McDon Multimedia Promotions for issuing dud cheques meant for the payment of boxers’ purses and ring officials in the aftermath of the boxing tournament dubbed ‘Fist of Fury’ held at the Accra Sports Stadium on the 5th of December 2014,” said the release signed by GBA General Secretary, Patrick Johnson.

“In a statement issued after its last meeting held on 20th January 2015, the GBA indicated that all the cheques which the promoter, Mr. Atitsogbe deposited with the Authority prior to the fight in accordance with the rules were dishonoured by the Banks upon presentation as it turned out that his accounts did not have the requisite finances to honour his obligations,” the press release continued.

“According to the GBA, barely two days after the fight night, Mr. Atitsogbe absconded without settling the outstanding obligations and has since remained in hiding sending occasional text messages with his whereabouts unknown,” the GBA statement added.

It concluded: “As a result, the GBA have been compelled to source funding from other avenues partly to remedy the situation.

“In light of the foregoing, the GBA have suspended Mr. McDon Atitsogbe’s promotion licence indefinitely and is awaiting teh outcome of its complaint to the Police and the possible apprehension of Mr. Atitsogbe to advise itself on subsequent steps to be taken.”