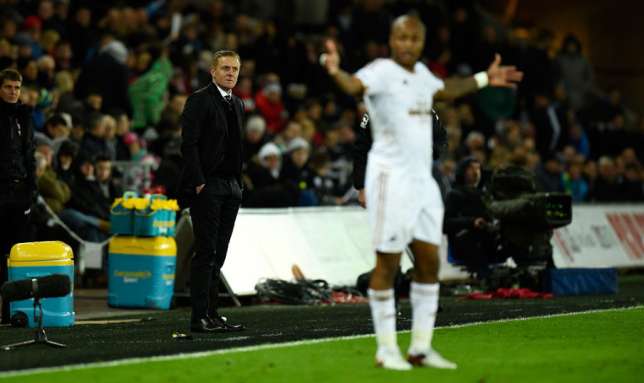 Andre Ayew’s Swansea City have party ‘reluctantly parted company’ with manager Gary Monk after a run of poor results at the Wales club.

The decision according to the club was made in the best interest of Swansea City Football Club and Ayew and his team mates are yet to see who will be taking charge for the rest of the season.

“The decision has been made very reluctantly and with a heavy heart.

“To find ourselves in our current situation from where we were in the first week of September, and considering the drop of performance levels and run of results over the last three months, it has brought us to this unfortunate decision today.

“Garry took on the job 22 months ago with the backing of everyone at the club. And when you take into account the excellent campaign we had last season when we broke all club records in the Premier League, nobody foresaw the position we would be in at this moment in time.

“Bearing that in mind and the current uncertainty around the club, we felt the situation needed clarity to move forward.

“It was not a decision we took lightly, especially given Garry’s history and standing within the club. And it goes without saying that we wish Garry all the very best for the future and thank him for his tremendous service, not only as a player over the last decade, but also as our manager. He will always have a warm welcome at this football club.”

Gary Monk signed Andre Ayew on a free transfer from French Ligue 1 side Olypique Marseille at the start of the season. The Ghanaian player flourished under Monk despite Swansea City drop of form and has pulled out a series of great performances week by week.

Former Liverpool and Swansea City boss Brendan Rodgers has been linked as new coach for Andre Ayew and co. Scotland international and former Manchester United boss David Moyes is also in the frame to take over at the Liberty Stadium.