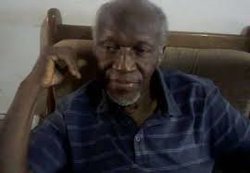 The funeral activities of the late Black Stars coach and player, Nana C.K. Gyamfi has been rescheduled from the earlier announced date (11-12th December,2015), according to the family.

The funeral rites of the late Nana Gyamfi Kumi I (aka C.K. Gyamfi) – Guantoahene of Benkum Division of the Akuapem Traditional Area has been rescheduled as follows:

Any inconvenience is deeply regretted.