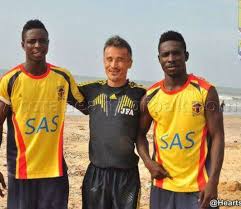 Former Champion club Accra Hearts of Oak Head Coach Kenichi Yatsuhashi has revealed his players lack fitness and he is working hard so the team would be resilient when the new season kicks off.

The American Japanese Coach after his two years mandate with the club has started training with the “Phobia boys” following their poor performance on the league log last season.

“So far, they are responding positively on the kind of exercises I’m putting them through. With time, they would regain their fitness.” Kenichi added.

On his view of whether Hearts of Oak would lift the ultimate trophy when the league commences, he said, “until we play our first match, I can’t say we would be champions”.

The oldest existing club in the country last season struggles in the domestic league after they were placed 13th.

Coach Yatsuhashi said he was aware of the tough nature of the task ahead but was confident he will put the team into the best of shape for the coming season.

Hearts lost 3-0 in their Pre Season International friendly in Libya.