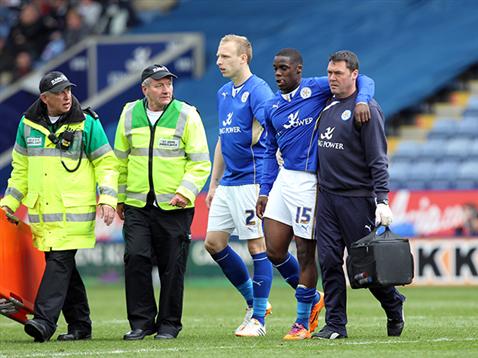 Schlupp (15) is out injured for the next 6 weeks

Schlupp (15) is out injured for the next 6 weeks

Claudio Ranieri has revealed that Leicester City will be without wideman Jeffrey Schlupp for around six weeks.

Foxes boss Ranieri said at his pre-match press conference before Saturday’s Premier League match at Everton that Schlupp was suffering with a hamstring injury.

Schlupp missed Monday night’s 2-1 win over Chelsea that took surprise pacesetters Leicester back to the top of the Premier League and he might not return until February.

“Danny Drinkwater came off with a hamstring problem against the Blues and is likely to be missing at Goodison Park tomorrow.”

“He should, however, be fit for the Boxing Day clash at Liverpool. “Schlupp is a little more serious,” Ranieri told reporters.

“Drinky is okay. It’s a little problem. Against Liverpool he is ready.”

Leicester go into tomorrow’s game two points clear at the top after 16 games of the season.

This time last year, they were bottom of the pile.