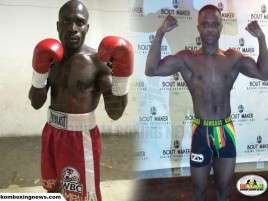 Streetwise Promotions, Error Hawk and Goodtime Promotions, organisers of the “Time to prove yourself” December 26, has added another championship bout, to the bill.
Isaac Dogboe and George Krampah, will vie for the World Boxing Organisation (WBO) Africa Featherweight championship at the Sports Hall of the Accra Sports Stadium.

Also on the bill, will be former Black Bombers member Duke Micah and Ekow Wilson for the World Boxing Organisation (WBO) African Battamweight title, with National Welterweight title fight between Justice Addy and Isaac Aryee, whilst Emmanuel Anim and Ayi Ayitey will battle it out for the National Super Middleweight title.
Maxwell Amponsah and Stephen Abbey will also engage in an eight round contest in the Light Heavyweight division, with Felix Williams and Kamarudin Boyefio also fighting in another eight round contest in the Super Featherweight division.
Kpakpo Allotey and Isaac Amponsah will fight in an eight round Super Lightweight contest, whilst Thomas Awinbono and Ebo Electric will fight in a Super Middleweight contest.
According to the organisers, the VIP and Ring Side will attract GHS30.00 and GHS50.00 respectively, whilst the Popular Stand will go for GHS10.00.