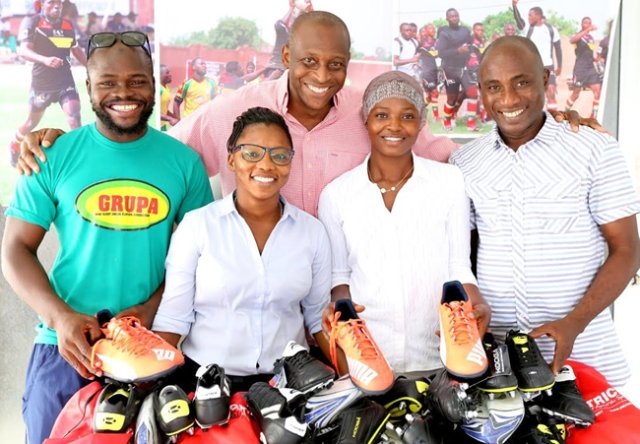 The President of Ghana Rugby Football Union (GRFU), Mr. Herbert Mensah, has donated kit and equipment to the women rugby teams in Ghana to support their efforts to revive female rugby in the country.

The President whose priority is to develop Rugby in Ghana especially women and kids teams presented a set of boots, jerseys and balls to the ladies.

According to Mr. Abdul-Aziz Issah (Aziz), Secretary General of GRFU, who did the presentation on behalf of the president, underscored the importance Mr. Mensah attached to the ladies teams.

Speaking to the press, the Secretary General also noted that the previous administration ignored and paid no attention to the women teams which really discouraged most of the ladies, adding that even the men teams were not that effective.

Aziz acknowledged the competence of the current administration headed by Mr. Herbert Mensah, he lauded the President for his massive support in terms of monetary and motivational contributions as well as his leadership in guiding Ghana rugby to higher levels.

“The President has taken it as a task to resuscitate the ladies teams because they have been left idle for a very long time by the former management of the GRFU. In a move to fulfil the promises he made to the ladies he presented these items to help improve their teams”, he said.

In an interview Ms. Gifty Kukua Aggrey, captain of the women national team who received the items on behalf of the ladies, expressed gratitude to Mr. Herbert Mensah for his kind gesture and all his efforts to develop the women teams.

She said the donations will help to motivate the ladies to come for training sessions since that has been their challenge under the previous administration.

“The President, Mr. Herbert Mensah, has promised us and today has fulfilled his promise by providing us with boots, balls and kit for our training and we appreciate that a lot. We, the ladies, have been ignored for long by the previous administration, but we thank God for bringing Mr. Herbert Mensah on board with his massive support. Therefore we are also going to put in our best not to disappoint him”, she said.

According to Mr. Mensah, the establishment of the Ghana Female Rugby Association (GFRA) is in an advanced stage and should be finalised early in 2016.

“Women’s Rugby in Ghana will never reach its full potential without a dedicated rugby body that represents the interests of female rugby players and guide the development of women’s rugby in Ghana. Once established the Ghana Female Rugby Association will also have representation on the GRFU Board and will be acknowledged as a voting member of the GRFU,” Mr. Mensah said.