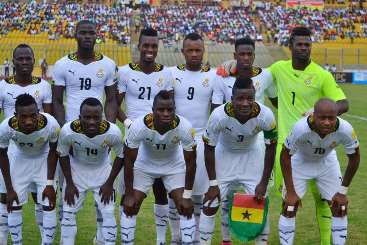 Former Ghana FA chairman, Dr. Nyaho Nyaho-Tamakloe has challenged the current crop of players in the Black Stars to leave a legacy worth emulating like the legendary CK Gyamfi.
Charles Kumi Gyamfi, won the African Cup of Nations with the Black Stars as a player and later as a coach on two occasions and the former FA Boss insists our current players must replicate his legendary status.
C.K Gyamfi who passed on at the age of 86 a few months ago was lauded by the Confederations fo African Football as a hero for the development of the Ghana on the continent.
Speaking to the media about the late CK Gyamfi, Dr. Nyaho Nyaho-Tamakloe insisted the current Black Stars cannot produce another football legend to represent Ghana in the mold of CK Gyamfi since the current generation of players are money conscious.
The current Black Stars players have been locked in a tussle with the Ministry of Youth and Sports over a reported slash in their winning bonuses.
“The sort of mark that CK Gyamfi has left, I don’t think that any of the present footballers can leave such a mark. Their commitment to the national level is not that high.”
“They play football more for money so they will not leave an indelible mark in the annals of football history,” Nyaho-Tamakloe told the media.
“They however have to look at what the state has done for CK Gyamfi and replicate what he did. They will also be recognized in a similar manner.”
Gyamfi led the Black Stars to two Africa Cup of Nations titles in 1963 and 1965 as a player-coach.