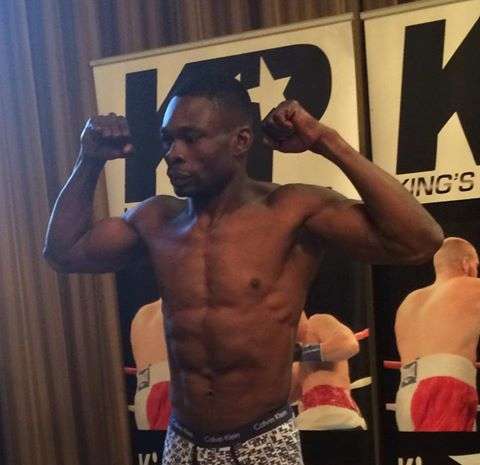 Michael Gbenga is demanding an immediate match against the winner of Saturday’s rematch between Braimah “Bukom Banku” Kamoko and Ayitey Powers.

He lost a decision to Bukom Banku in 2005 and knocked out Ayitey Powers in 2011, now he is demanding to face whoever wins.

Gbenga, who is now based in the U.S., previously fought both Kamoko and Powers in Accra, losing a unanimous decision and the then-vacant Africa Boxing Union light heavyweight belt to Kamoko on April 1, 2005, and scoring a ninth round KO over Powers to win the Ghana light heavyweight title on January 29, 2011.

Now, “The Amazing” says he’s ready to throw down again with either of his two old foes and possibly both, pending Saturday night’s outcome.

“I am calling for a three-man boxing tournament against Banku and Powers,” Gbenga told Bukomboxingnews.com exclusively from his U.S. base. “We can do a round-robin where we all face each other. That will be awesome but if the winner is willing to face me, we can still fight; I’m all for it.”

Gbenga has lost his last eight bouts and 14 of the last 15 but says he has gained enough experience to seek out a rematch against either of the two eccentric boxers who are scheduled to clash at the Baba Yara Sports Stadium in Kumasi on Boxing Day.

“I fought both of them at light heavyweight, but I see they are both now fighting at cruiserweight,” said the 36-year-old. “That shows how disciplined they are. They can be 180, 190, I will just weigh 170 and fight them in the name of the game we all love and which puts food on our table.”

Gbenga has also expressed profound respect and appreciation to Joy Dadi Industries and Landmark Promotions for putting up the expected big fight in Kumasi.

“I really appreciate the promoters and sponsors for putting so much money into boxing, trying to keep the sport alive. It’s great and encouraging.”