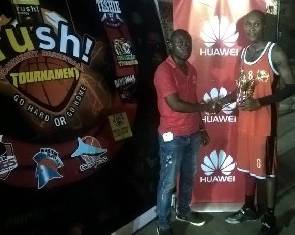 Huawei Ghana presenting the award to the winner

Global Telecommunications and ICT Leader, Huawei Technologies Ghana, has reinforced its commitment to promote sports development by rewarding the Most Valuable Player (MVP) at the just ended Rush Community Basketball Tournament.
The tournament which was won by Osu Hawks, saw their Handler, Mr. Emmanuel Kwame Dickson presented with a brand new sleek Huawei P8 Lite courtesy, Huawei Ghana. Huawei, the third largest Smartphone producer in the world, as part of its sponsorship agreement with organizers of the flagship basketball tournament, made the presentation after the final game.
“The Rush Community Basketball Tournament is a special event for us at Huawei, because we like to make a difference in the lives of young people by promoting sports development in Ghana,” Said Robin Sun, Country Manager for Device Business at Huawei Technologies Ghana. “Our company is keen on pushing the sports agenda as an important aspect of national development”.
Speaking on his award, Mr. Emmanuel Kwame Dickson also commended Huawei for their efforts. He said; “I am very much pleased to receive this award, I have read a lot about the premium Huawei P8 Lite and very excited that Huawei Ghana has made my dream of owning one possible. I also want to thank Huawei for their support and contribution to the development sporting talents and say that I am now motivated to challenge myself to greater heights”, he added.
In its first outing, the Rush Community Basketball Tournament is regarded as the most competitive professional-level basketball tournament in Ghana. During the finals, CEO of Gametime Entertainment, organisers of the tournament, Mr. Lewis Fadipe said, “I thank Huawei for coming on board to support us. It’s a testament to their commitment to ensuring sports development. We look forward to next year’s tournament.
The finals of the tournament which was fiercely competed among the top four teams produced scintillating results as Osu and Ashaiman defeated their opponents from Tudu and Tema respectively, to book their places in the grand finale.
The finals brought close to a thousand fans to the Accra Poly basketball court and saw closely competitive, end-to-end action. At the end of proceedings, the Osu Hawks overcame their opponents with finesse and a well-regimented team to take home the coveted trophy.
Locally, Huawei Technologies Ghana had previously signed a lucrative partnership with the senior national team, the Black Stars in 2014 and the 2015 Millennium Marathon in Accra. On the international front, the Smartphone giant continues to play a pivotal role in the sports development agenda as they have in the past four years expanded their sponsorship portfolio to include the likes of A.C. Milan, Arsenal FC, Borussia Dortmund, AFC Ajax, PSG, SL Benfica, and La Liga.
The company was also recently adjudged the best CSR ICT Company at the 2015 Ghana CSR Excellence Awards.