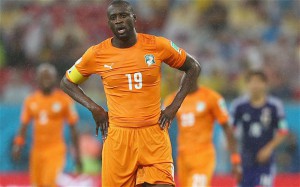 The Manchester City star was hoping to make it five times in a row at the CAF Awards.

The 32-year-old Manchester City and Cote d’Ivoire captain has been named Africa’s player of the year between 2011 and 2014.

Toure would have set a new African record as the only player to have won the award on five occasions after Samuel Eto’o of Cameroon won in four times.

Toure, who beat Borussia Dortmund’s Aubameyang to the prize in 2014, said: “I am disappointed but that won’t take anything from anybody.

“I am sure Andre Ayew is also disappointed after what he did last year.

“This is not the time to complain. We will all go back and continue to work hard,” Toure told Manchestereveningnews.co.uk.