I’m Honoured To Be ‘Most Abused’ Sports Personality - Nyantekyi 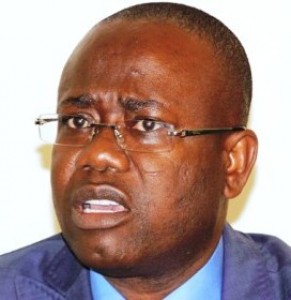 I’m Honoured To Be ‘Most Abused’ Sports Personality – Nyantekyi

Ghana Football association (GFA) President, Kwesi Nyantakyi  was adjudged as the most verbally abused sports personality in Ghana in a recent survey.

Since World cup 2014, the FA boss has been in the spotlight especially for the negative news beginning with his cameo during the World cup investigative committee that was set up by the president of Ghana to investigate Ghana’s world 2014 fiasco.

Nyantakyi was re-elected as president of the West African Football Union – WAFU during the Union’s zone B congress at the Movenpick Ambassador hotel. The GFA president pulled 4 votes out of a possible 7 votes to his contender Gibrilla Amidu of Niger who accumulated 3 – votes.
During the press briefing after journalists had been ushered out of the congress room before members discussed congress agendas and cast their votes, Nyantakyi was asked, how he felt after reading he has been voted as the most verbally abused (insulted) sports personality. His answer was very fascinating coming from a man who has not had it easy with the press.

Nyantakyi who has led Ghana to three different world cups answered, “Well what else can I do? I’ve decided to do something that has become the subject matter of vilification and all adverse commentary.
ran at you. one way of managing stress is to avoid it.”

Lately, when you call me to inform to listen I don’t i just tell you to listen and keep it to yourself because don’t want to know. It is an honour to be the most insulted person in football, he added.