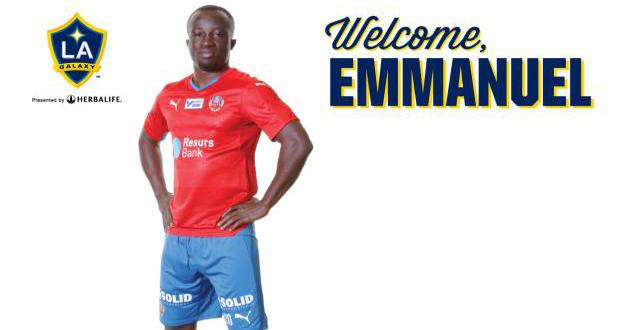 American Major League Soccer side, LA Galaxy have announce the signing of Ghanaian forward Emmanuel Boateng from Swedish top tier side Helsingborg IF.

The 21-year old who was a member of Ghana’s U-20 team at the 2015 FIFA U-20 World cup joins the Los Angeles based franchise for an undisclosed fee and will be added to the Galaxy’s roster as an International, pending P-1 Visa and International Transfer Certificate (ITC).

The former Right to Dream Academy forward spent three seasons at Helsingborg IF where he played 34 games and scored four times.

LA Galaxy coach Bruce Arena spoke on the arrival of the Ghanaian: “Emmanuel is a talented, young, attacking player who will add valuable depth to our offense,” said LA Galaxy Head Coach and General Manager Bruce Arena. “He will continue to develop as a player and we are excited to add him to our roster.”

Who is Emmanuel Boateng?

Born in Accra, Ghana, Boateng joined an African soccer developmental program, the Right to Dream Academy, and went on to earn a scholarship at the age of 15 to Cate School, a boarding school in Carpinteria, California. During his time at the Cate School, Boateng featured for local club sides Santa Barbara Soccer Club and South Coast Strikers. In 2011, he was named MVP of the prestigious Milk Cup, an international youth soccer tournament featuring the world’s brightest young talent.

Boateng skipped his senior year at Cate School to attend University of California, Santa Barbara, where he made an immediate impact as a freshman, scoring four goals. That year, he earned honors as Big West’s Freshman of the Year and First Team All-Big West.

After playing for Ventura County Fusion in the PDL during the summer of 2013, Boateng signed his first professional contract with Helsingborgs IF of Allsvenskan, Sweden’s top-flight professional division. Since 2013, he has made 37 appearances, scoring four goals.