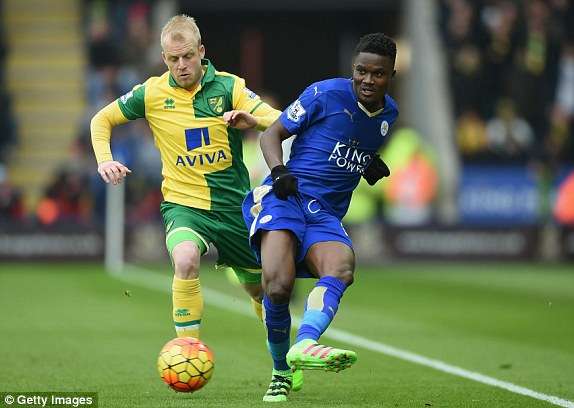 Black Stars defender, Daniel Amartey made his debut for English Premier League leaders Leicester City on Saturday in their game against Norwich City.

The versatile defender who joined Jeffrey Schlupp at Leicester in the January transfer window from FC Copenhagen was handed a start by his manager Claudio Ranieri and went on to play 78 minutes before being replaced by Jose Leonardo Ulloa.

Leicester City who are surprise leaders in the English Premier League continued the form that has seen them top the league in most part of the 2015/2016 season with another win at the King Power Stadium.

Daniel Amartey’s replacement in the game Jose Leonardo Ulloa scored the only goal for his Leicester City side as they claimed all three points with the 1-0 win over Norwich City.

Ghanaian defender Jeffrey Schlupp who also returned from injury in the week and started training made an appearance for Leicester City in the win against Norwich City.

Schlupp was introduced after 69 minutes of play, replacing Shinji Okazaki.