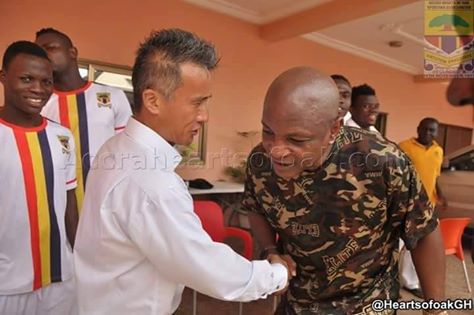 Hearts of Oak coach Kenichi Yatsuhashi heaped praise on his players for the hard fought 2-0 win at Medeama.
The Phobians were for the chunk of the match pinned down by the home side but kept the concentration and delivered two knockout punches.
Substitute Cosmos Dauda and Eric Kumi netted in the second half to give Hearts their first win at the T&A Park in four trips.
Yatsuhashi took to Twitter to praise his boys for that brave performance:
“Today’s win against Medeama is won by players’ hard works & supporters’ cheers, nothing else.”

The Phobians made it two wins from their opening two games in the league following another great performance in Tarkwa which earned them 2-0 victory.

A 77th minute strike from new signing Cosmos Dauda and an injury time goal from winger Eric Kumi ensured the Yatsuhashi team walk away from Tarkwa with all the three points for the first time since 1969.

As impressive as the result was, Yatsuhashi still believes his team has a lot more to offer in the coming weeks.

“We were able to show what we’ve been working on in training, even though I wasn’t entirely satisfied with everything. But I saw progress in our play and we’re still improving everyday little by little and you can expect a lot more,” Yatsuhashi told Kumasi-based Ultimate FM.

Hearts of Oak will be looking for a third straight win when they visit struggling Ebusua Dwarfs at the Robert Mensah Stadium in Cape Coast on match day three. Dwarfs have lost both of their opening two games.