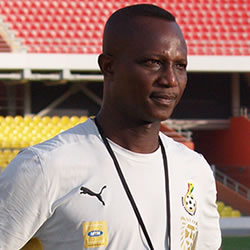 Al Khartoum head coach Kwesi Appiah has said the club’s failure to sign the players he recommended after the end of last season cost his failure to guide the team past the first round of CAF Confederation Cup.
The former Black Stars coach led his side to finish third on the Sudanese league log last season and he recommended seven players to augment his squad considering he was going to meet the best clubs in the continent.
The club failed to sign any of the seven players he requested for and rather brought him six players from the second division in the Sudanese league.
Appiah struggled to put up a strong unit to represent the club against Ugandan side Sports Club Villa in two legs in the CAF Confederation Cup and were knocked out of the first round of the competition 1-0 on aggregate over two legs.
And he reckon the poor recruitment caged his ambitions for the year.
“My main ambition was to get the team to the finals but unfortunately we couldn’t make it. After the end of last season, I needed seven new players and they could not get any of them,” the former Kotoko defender to the press .
“They brought players in that you have to bring them to the level that you’ve built already. So all these things reduced our progress.” He noted.
He denied insinuating that the players are not good, but they aren’t up to the premiership level to compete against the best.
“I am not saying the players are not good, but the players they brought were second division players, about six of them, so when you sign second division players, you have to bring them to reach the level of premiership players.
“That aside, they are picking up well,” he said.