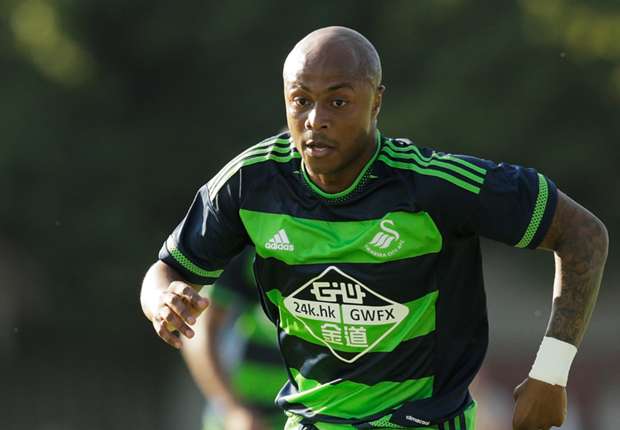 Andre Ayew starred for Swansea City in their 2-1 comeback win over Arsenal to move six points clear of the relegation zone on Wednesday night.
The 26-year-old Ghanaian lasted 88 minutes as the Swans picked valuable points at the Emirates stadium.
The Gunners started much brighter with Joel Campbell firing home from an angle after several near misses.
But the Welsh side hit back before the break as Wayne Routledge beat Petr Cech with a cool finish, and they completed the dramatic turnaround with 15 minutes left as Ashley Williams turned home a Gylfi Sigurdsson cross to send the travelling fans into raptures.
Arsenal tried to respond late on but the Swans defence held firm to hold on for a crucial three points ahead of a set of important fixtures in the coming weeks.
Ayew has been at the centre of Swansea’s turnaround season, propelling the side with some fine displays in his debut Premier League season.
The Emirates Stadium has been a happy hunting ground for Swansea since they won promotion, with just one defeat in four trips to north London in the Premier League.