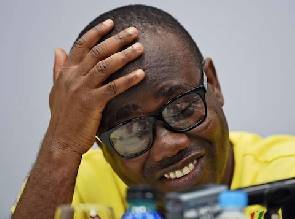 The vice president of the Ghana Football Association, George Afriyie has revealed that his boss Kwesi Nyantakyi earns less than $600 or GHS 2000.00.
The FA is noted by many as the home football administrators make huge sums of money, but the Liberty Professionals chairman who was nominated to assist Nyantakyi chair the football administration in the country has revealed that he doesn’t earn much as is being purported.
FIFA new reforms adapted at the just ended FIFA congress in Zurich, demands that presidents of the various federation must declare publicly their salaries to clear the notion of exorbitant payment as salaries.
And George Afriyie said the Ghana FA welcome the idea.
“It will interest you to know that Kwesi Nyantakyi takes less than GHC 2000 as allowance which many won’t believe because he is not on salary,” George Afriyie told Starr FM.
“I was amazed when I saw the FIFA President’s salary I was astonished with his qualification and pedigree.
The former Administrative Manager of Great Olympics went on to add that the salary of the Chief Executive Officer of Ashanti Gold Sporting Club, Cudjoe Fianoo is far better than Kwesi Nyantakyi.
“Even the CEO of Ashgold, Kudjoe Fianoo’s salary is far better than Nyantakyi and we welcome this declaration.” he said.