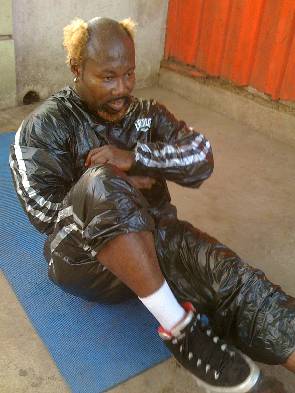 Another Ghanaian super middleweight, Theophilus Tetteh (16-7-2, 9 KO’s) scheduled to meet Britain’s Nathan Decastro (6-0, 4 KO’s) on the bill to come on.

Ghana’s cruiserweight boxer, Michael Ayittey “Powers” has had his bout with Daniel Mendes of the United Kingdom cancelled at short notice.

The bout was schdeduled to come off on Friday, March 11, at the York Hall, Bethnal Green in London, England.

Mendes is reported to have sustained an arm injury in training, causing the postponement of this bout.

In a press briefing, Ayittey said; “I am disappointed,” he lamented. “If you see me now, I am a correct cruiserweight boxer. I am a lot bigger now. This is the correct physique and weight for a cruiserweight so boxers should be ready for me.”

“I have to go to Ghana and fight again. If I win, i will move on to Australia to challenge for the WBO cruiserweight title.” he added.

Regardless the cancellation of this bout, other undercard matches will still take place and it will see Super middleweight Ernest Amuzu (19-1,19 KO’s) take on George Hillyard (12-6-1, 6 KO’s) with another Ghanaian super middleweight, Theophilus Tetteh (16-7-2, 9 KO’s) scheduled to meet Britain’s Nathan Decastro (6-0, 4 KO’s) on the bill.