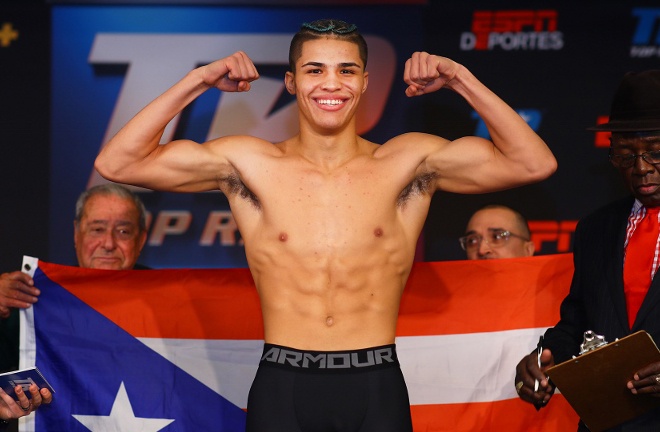 Whenever elite boxing prospects start making waves, promoters and managers hunt them down like piranhas in hopes of turning them into the next Floyd Mayweather Jr., Manny Pacquiao or Oscar De La Hoya.

Almost two weeks ago, the hunt for who many feel could be the next big thing ended when Top Rank signed the youngest fighter in its promotional history — 16-year-old Xander Zayas.

“The feeling of signing the contract was amazing,” Zayas, a high school junior, told Sporting News. “My phone blew up. Everybody started texting and congratulating me. It was an amazing feeling.”

Before he discovered the gloves, Zayas did what any child growing up would do — play with his toys and friends. But an unfortunate recurring event started happening when he turned 5 and it would shape the course of his life in San Juan, Puerto Rico.

“As soon as I got to the gym, I fell in love with it right away,” he continued. “I told my mom I liked it and wanted to continue going back.”

At age 6, Zayas had his first amateur fight. He wound up winning his first 20 bouts. From there, Zayas built a 118-14 record as an amateur. Today, he stands as an 11-time Puerto Rican and United States amateur champion, including back-to-back national titles in 2017 at 125 pounds and in 2018 at 152 pounds. Zayas was also named the most outstanding boxer of last year’s competition.

Zayas was faced with a difficult decision, though, after the 2018 national amateur championships: Wait to compete in the 2024 Summer Olympics because his 17th birthday on Sept. 5 falls 45 days short of being eligible for the 2020 Games, or make the jump and turn pro at an age when teenagers are thinking about getting their driver’s license, hanging out with their friends and going out on dates?

Zayas, who will be launching his career at welterweight, is looking for his pro debut to take place right after his birthday in either Nevada or Texas since those are the only states that allow fighting at 17.

One of the biggest criticisms Zayas has heard since his announcement is that he’s too young to be able to handle the burden of being a professional athlete. He understands the criticism because the pressure is a lot to handle. But having the support system of his mother, stepfather Orlando Garcia Melian, trainer Javiel Centeno at SweatBox in Florida and manager Peter Kahn makes Zayas self-assured that his career is in the right hands with people who are genuinely looking out for him.

“I think I have a great team,” Zayas said. “They want the best for me and will help me a lot throughout my career. I know who is good and who is bad for me because it’s common sense. You should be able to see who is good and who is bad. I think my team and I will do a good job deciding those things. I will be telling myself and others around to keep me on a short leash. If I don’t, my mom and stepfather will do that. I will make sure I stay focused and do what I have to do.”

Expectations for Zayas are high. Some are already comparing him to another Puerto Rican boxer — four-division world champion Miguel Cotto. While Cotto is Zayas’ idol in the sport, he wants to pattern his career trajectory after a man who is currently the biggest box office attraction in the sweet science.

“I want to do what Canelo Alvarez did,” Zayas said. “I want to take it step by step. I don’t want to rush anything. I want to take everything slow and making the right decisions. But for the first few years, I’m looking forward to being in my everybody’s mindset in that they want to see me fight. I’m looking to make a big statement every time I step into the ring.”

Nobody knows how great Zayas will be. Could he become a Mayweather, Pacquiao, Alvarez or Cotto? Zayas isn’t sure, but he does make two promises on what boxing fans can expect in the future.

“They can expect a lot of great moments,” he said, “and me becoming a world champion in multiple weight classes.”