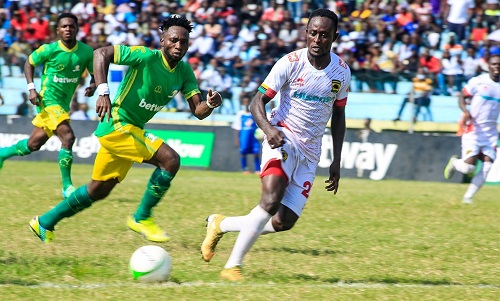 Asante Kotoko held Aduana Stars to a goalless draw at the Nana Agyemang Badu Park in Dormaa on Saturday in Match Week 27 of the Ghana Premier League.

Both teams were looking to secure all three points in a bid to boost their title bid but in a game that was highly competitive, the two sides failed to find the back of the net.

The Ogya boys dominated possession in the first half with Samuel Bioh and Sam Adams leading the charge.

Asante Kotoko were playing deep in their own half and relied on the counterattack.

The hosts went close to fetch the opener but Sam Adams’ shot was tipped over the bar by Razak Abalora who was in a spirited mood.

In the 42nd minute, Sam Adams was presented with another clear opportunity to put his side ahead but he again fluffed his line as Abalora made a big save to deny him to end the first half goalless.

After recess, Latif Anabila came on to replace Emmanuel Keyekeh and Evans Adomako for Augustine Okrah who had a quiet game and Sarfo Taylor for Emmanuel Gyamfi.

The game opened up as both teams tried to find the opening goal.

The visitors was close to breaking the deadlock but Fabio Gama failed to glide the final pass to Nettey who was unmarked.

Kotoko appeared much more organized in the final embers of the game but failed to bury the half chances to go ahead.

The result leaves Kotoko at the summit of the table with 47 points while Aduana moves to the 7th position with 40 points.