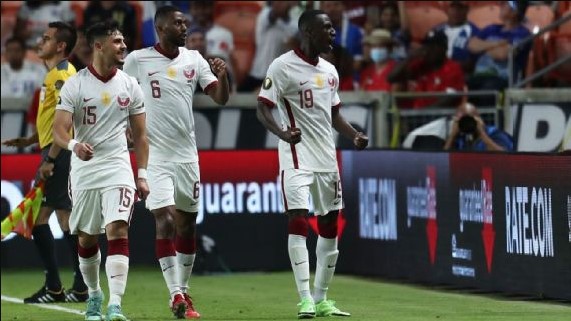 After a nearly two-hour weather delay to start the match, Qatar and Panama followed a scoreless first half by combining for six second-half goals in a wild 3-3 draw on Tuesday in CONCACAF Gold Cup play at BBVA Stadium in Houston.

In the Group D openers for both, Qatar blew three separate one-goal leads in the second half in making its Gold Cup debut as the reigning Asian champions.

After both squads were kept off the scoreboard despite several challenges before intermission, the teams traded four total goals in a 10-minute span to open the second half. Qatar’s Akram Afif opened the scoring in the 48th minute with a mid-air one-timer from inside the six-yard box for a 1-0 lead.

Three minutes later, Panama’s Rolando Blackburn netted the first of his two tallies on a header in traffic off a corner kick set-up. In the 53rd minute Qatar again jumped ahead on a blast by Almoez Ali, but Panama evened things at 2-2 five minutes later on Blackburn’s second.

Both teams then scored on penalties, with Hasan Al Haydos succeeding for Qatar in the 63rd minute before Panama’s Eric Davis delivered in the 79th to make it 3-3.

Qatar outshot Panama 15-11 for the match, while Panama owned 56 percent of the possession time.