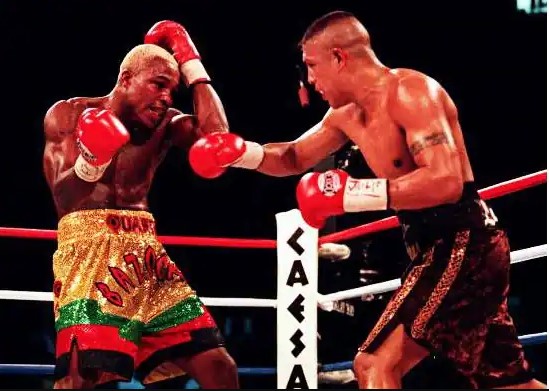 Ghanaian boxing legend Ike ‘Bazooka’ Quartey is convinced that his only genuine loss during his active days in the ring was when he challenged American Fernando Vargas for the IBF junior middleweight title.

The bout staged in April 2000, was the third defence for Vargas, who was then undefeated in 18 bouts and had successfully gone past big names like Howard Clarke, Raul Marquez and Ronald ‘Winky’ Wright.  Ike was returning from a 14-month lay-off and was expected to use that bout as a bounce back from the loss to Oscar de La Hoya.

Ike, who was spotting a gold-coloured hair did not deliver that combative performance he is usually known for and eventually lost via a unanimous decision to the American. Two of the judges’ cards read 116-111 while one read 114-113. Vargas went ahead to record some key victories but lost out on the biggest among them – against then undefeated Felix Trinidad and Golden Boy Oscar de La Hoya in December 2000 and September 2002, respectively.

“The Vargas fight was my only genuine loss. I didn’t prepare well. I arrived at the camp late,” Ike revealed in an exclusive interview with Joy Sports Nathaniel Attoh.

The former WBA welterweight champion has always argued that he won the fights against Oscar de La Hoya and Vernon Forrest.

On his last career bout which was the high profile contest with Ronald ‘Winky’ Wright, Ike explained that it was purely a meeting of two good friends who wanted to entertain the fans.

“We are friends from way back. We came together to entertain the fans and achieved just that,” he added.

Quartey who was honoured with a grand medal of the Republic of Ghana in 2008 by then President J.A. Kufuor for his achievements, had earlier staged a comeback in 2005 after a five year lay-off. He retired after 42 bouts of which 37 were wins. Thirty two came through knockouts and four were losses with a draw making up the record.