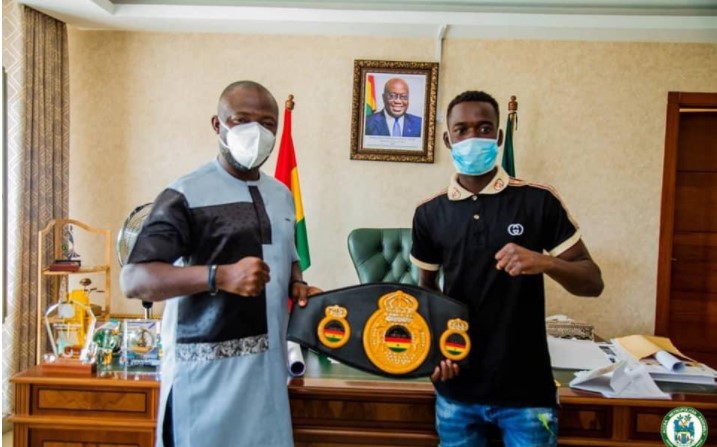 The Ghanaian featherweight champion John Laryea together with his team paid a courtesy call on the Mayor of Accra Metropolitan Assembly (AMA) to presented the national title to him and officially invite him to the fight night as he battles Sabastianus Natanel for the WBO African featherweight title.

The John Laryea team was led by his manager Samuel Anim Addo who introduced the members of the delegation and officially invited the Mayor of Accra Hon. Mohammed Adjei Sowah to lend his support to the July 31 fight night promoted by the Bronx Boxing Promotions which will be headlined John Laryea and Sabastianus Natanel.

“This will give him opportunity to be ranked in the world as well”. He added.

Hon. Adjei Sowah also who hails from Bukom where boxing is brewed happily received the delegation and quickly acknowledge the contribution of boxing to the economy of Ga-Mashie and Ghana as a whole.

According to him the likes of Azumah Nelson, Ike Quartey, Alfred Kotey just to mention a few made history, brought wealth to Bukom through boxing and changed the lives of many people that were part of his team and says that the success of John Laryea will create future many.

“We come from a difficult area and it is your turn to change lives like former champions have done” the Accra Mayor said.

“Your success will create an economy and open a future for many in the community, so you have the spirit of all your followers and therefore you cannot disappoint them.” He expressed.

The Accra Metropolitan Assembly Lord later admonished the boxer to be disciplined and praised the team especially Carl Lokko who is the trainer of John Laryea for his continuous production of world-beaters.

“You can only succeed if you are disciplined, be organized, and get ready for the future ahead of you. Discipline is not your training but your entire life” Hon. Adjei Sowah said.

and Daniel Aryee a member.