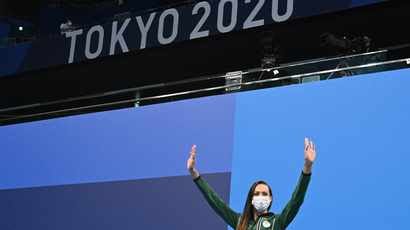 TATJANA Schoenmaker was all smiles as she clinched Team South Africa’s first medal at the Tokyo Olympics on Tuesday in the 100m breaststroke final.

It wasn’t quite the gold that many fans would’ve hoped for, considering that she had produced an Olympic record in her heat.

But it was still a wonderful moment for the 24-year-old from Pretoria as she finished second in a time of 1 minute 5.22 seconds (1:05.22) to claim the silver medal in her first Olympics.

American teenage sensation Lydia Jacoby grabbed the gold medal with a well-timed surge in the last 25 metres to beat Schoenmaker with a time of 1:04.95 – which was short of the South African’s Olympic mark of 1:04.82.

It was King who reacted the quickest at the start as she pushed forward, followed by Schoenmaker and Jacoby.

But the South African kept her composure for the rest of the opening 50 metres, and eventually made up the ground on King to lead at the turn by a substantial three-tenths of a second (0.30), with Jacoby in third.

It looked like Schoenmaker was on course for the gold as she maintained her advantage over King, but with about 25 metres to go, it was Jacoby who brought the heat.

The 17-year-old – who hails from Anchorage in Alaska – produced a remarkable kick in the closing stages and edged ahead of both Schoenmaker and King, touching the wall in a superb time of 1:04.95, which was a new personal best, beating her previous mark of 1:05.28.

It was a tremendous performance by Jacoby, who is the first ever Olympic swimmer from Alaska.

But Schoenmaker will remember her first Olympic medal in years to come, and South Africa’s golden girl in the breaststroke from the 1996 Atlanta Games, Penny Heyns, immediately expressed her best wishes to her compatriot.

“Huge congratulations @TRSchoenmaker So proud of you … first medal for @TeamSA2020,” Heyns, who was at pool-side at the Tokyo Aquatics Centre, posted on Twitter.

Now Schoenmaker will prepare for her favourite event, the 200m breaststroke, which starts with the heats on Wednesday. She was drawn in heat four at 12.49pm SA time.