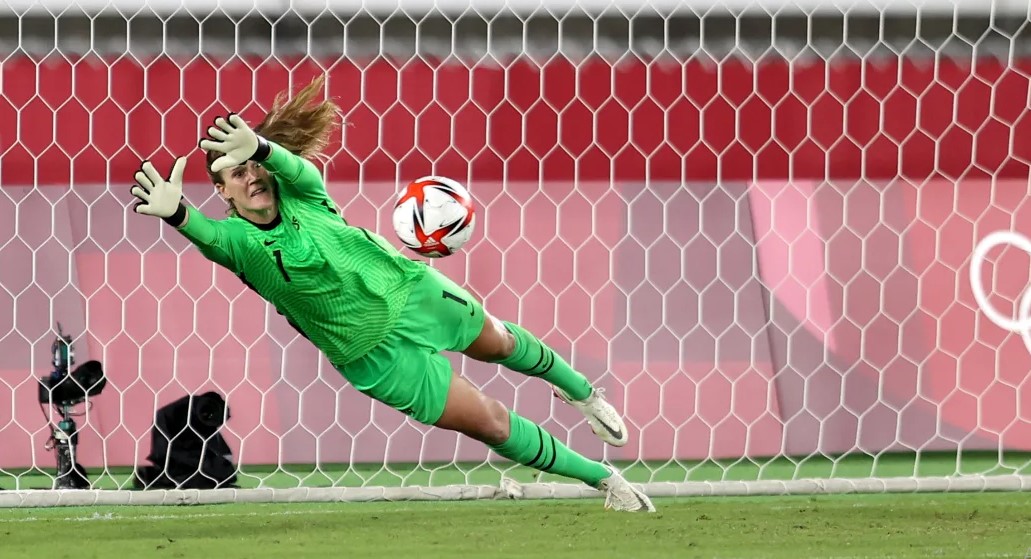 When Team USA goalkeeper Alyssa Naeher told Tokyo 2020: “We still haven’t played our best soccer,” it sounded like a warning.

The threat is implicit: We can play much better than this.

Performances at these Tokyo Olympic Games have hardly been vintage for the U.S. women – who’ve, in all fairness, set the bar dizzyingly high since women’s football made its Olympic debut in Atlanta in 1996. But even with a 0-3 loss to Sweden on opening day in Yokohama, their biggest defeat in Olympic history, and a goalless draw with Australia to close out the group stage, here they are, familiarly deep in the competition.

The Americans are now just one win away from playing in a sixth gold-medal match (of a possible seven). And they face a familiar foe in the last-four.

“It’s going to be a battle from start to finish. We’ll need to show up prepared and ready to execute.”

The last time these two countries met in the Olympics was in 2012, when a late – and controversial – Alex Morgan goal saw the Americans sneak a 4-3 extra-time win at Old Trafford in Manchester. It’s a result that hasn’t sat well with the Canadians.

“I’m looking forward to having that hard-fought physical battle,” Naeher said of taking on a Canada team that hasn’t beaten the U.S. since 2001, but desperately wants to and might be sensing there’s blood in the water. “It brings an added intensity.”

Naeher hardly needs to up the intensity. Courageous and bold in her penalty area, she’s been among the U.S.’s top performers here at these Tokyo Olympic Games.

Watch her while the ball is up the other end, pinging around the toes of attacking talents like Morgan, Carli Lloyd and Megan Rapinoe. Naeher’s always locked on and ready to react. Her knees bent and eager for an intervention, she’s never switched off.

It’s a good thing too. Because without her heroics in the goalless draw against Australia to close out a wobbly group stage – and again in a goal-littered quarterfinal against the Dutch – American fans might be pondering the unthinkable: an early flight home from a second straight Olympic Games.

“For me it’s just part of the game,” said Naeher about the two saves she made in the penalty shootout against the Netherlands, where she seemed to fairly read the Dutch shooters’ minds. “You know going into any knockout-round game that it’s a possibility – so it’s all about preparation. About staying mentally focused and engaged and, you know, being present in the moment and being ready for that moment when it comes.”

Two saves in a shootout is more than a good day’s work for any goalkeeper, but it was hardly the extent of Naeher’s heroics on that day. She saved another spot-kick in regular time too – and at a time when the stakes couldn’t have been higher.

“You can have a moment in any game where you kind of build momentum off of it,” Naeher said of staring down the Netherlands’ Vivianne Miedema, scorer of a record-breaking 10 goals in four games at these Olympic finals. There were just 10 minutes to go and the score was tangled precariously at 2-2.

A goal would have likely ushered in an American defeat, and a second-straight quarterfinal exit from the Olympic Games for the four-time gold-medal winners and global pace-setters for women’s football.

Saviour between the posts

Naeher, who was outstanding as she led the U.S. to the 2019 World Cup title in France, is just the latest in a long line of US goalkeepers that stand as some of the best to ever play the position. From Mary Harvey, hero of the first-ever Women’s World Cup win in 1991, to Briana Scurry and all the way up to Naeher’s former teammate and iconoclast Hope Solo, the list of U.S. women’s national team goalkeepers is a long and proud one.

But you won’t catch Naeher thinking about her place in that lineage until the time comes. “Just being in the conversation with goalkeepers like that, it’s an honour,” she said. “But that’s something I’ll probably think more about when my career is over.”