Tokyo 2020 Basketball: Doncic and Slovenia through to last four 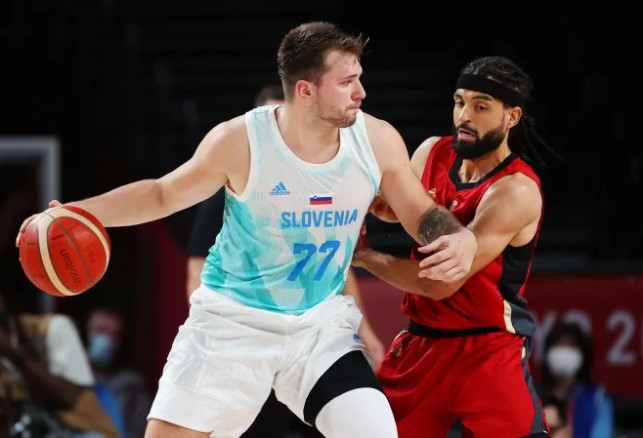 Slovenia will play Italy or France in the final four of the men’s basketball tournament after pulling away to a comfortable 94–70 win over Germany in the quarter-finals.

From a five-point lead at half-time, the Slovenians and Luka Doncic dominated the last two quarters.

Sharp-shooting Zoran Dragic poured in 27 points and Luka Doncic added 20 as unheralded Slovenia swept past Germany 94-70 Tuesday and into the men’s basketball semi-finals on their Olympic debut.

They will face the winner of a last-eight clash between Italy and France, while defending champions USA take on second-ranked Spain and Australia meet Argentina in Tuesday’s other quarter-finals.

It was an incredible effort from the Slovenians, who are ranked just 16th in the world.

They surged ahead early at Saitama Super Arena and never looked like losing against a German side ranked a place below them and who only scraped into the quarters on goal difference.

Small forward Dragic, who plies his trade in Spain, had six rebounds and four assists to go with his 85 percent scoring percentage while Dallas Mavericks star Doncic contributed eight rebounds and 11 assists.

Mike Tobey added 13 points while Maodo Lo put on 11 for Germany, who were back in the Olympics for the first time since 2008, when they were led by all-time great Dirk Nowitzki.

Slovenia dropped 25 points in the opening quarter to gain an 11-point cushion before Germany staged a comeback in the second quarter with Lo making nine points to inch them 32-31 in front.

But that was the only lead they had as Slovenia rallied with Dragic bagging his fifth straight field goal with a giant three-pointer close to the hooter to send them into the big break with a 44-37 advantage.

Dragic nailed another three-pointer seconds into the third quarter to pull them 12 points clear and they kept up the offensive pressure to take a 66-54 buffer into the final stretch.

Eight more points from Doncic in the fourth quarter and they were home and dry for a famous victory.