'Don't tell me what to wear on Kotoko Bench - Mariano Barreto 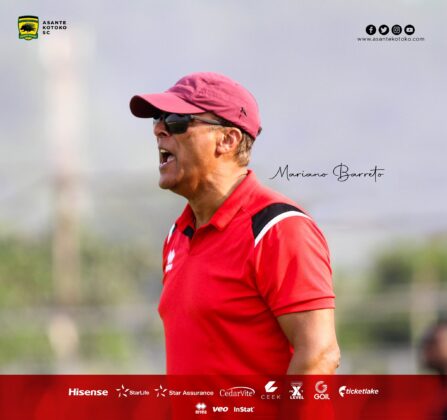 Asante Kotoko head coach Mariano Barreto says he would not sign a contract describing what he should wear at the dugout and what not to wear.

The 62-year old Portuguese tactician since joining giant’s Asante Kotoko SC has receive series of backlash including his style of dressing at the bench.

He has been spotted wearing unprescribed T-shirts and jerseys despite his outfit having contract with sporting wear manufacturer arrea to produce them with jersey, training kits, replicas among others.

Speaking in an interview with Kumasi based media outlet Nhyira FM, Mariano Barreto reiterated that nobody can tell him what to wear on match days. Emphatically, revealing that he was given three jerseys of which all were red colours.

“There is no line in my contract that I should wear this brand of T-shirt, because if that was in the contract I will not sign”Nobody can tell me what to wear and what not to wear, but I will explain to old Kotoko supporters”, Barreto revealed.

“I arrived hear and received three red jersey from Kotoko, if I have training

on Friday the jersey have to go for wash, if I train on Saturday I have to wash so I have only one”I used the other one and there was a problem and this is the most important thing, the problem is the shirt is red and the jersey of my players is also red and in the first match when I used it the fourth referee told me I have to wear bib on it because of the colour.”

So, from there I started using my shirt at the bench”All the jersey was Red because it coincide with the players jersey”.