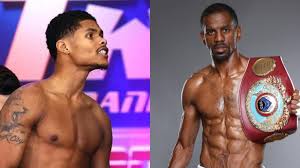 After getting sent to a purse bid and immediately canceling it by coming to terms, WBO super featherweight champ Jamel Herring and mandatory challenger Shakur Stevenson have a date and location for their long-brewing showdown.

ESPN reports that the pair have signed contracts to meet on October 23rd in Atlanta, GA’s State Farm Arena.

Per Mike Coppinger, both fighters will earn at least $1.5 million.

Herring’s (23-2, 11 KO) dominant performance against Carl Frampton this past April made this matchup a fair bit more intriguing than when Stevenson (16-0, 8 KO) first moved up to 130 and claimed mandatory

Stevenson has been virtually untouchable as a pro after his sterling amateur career, but Herring knows how to use his height and length to give anyone issues.

Whoever wins, let’s hope Top Rank is willing to set up a unification clash with Oscar Valdez afterwards.

We’ll keep you posted as the card develops.