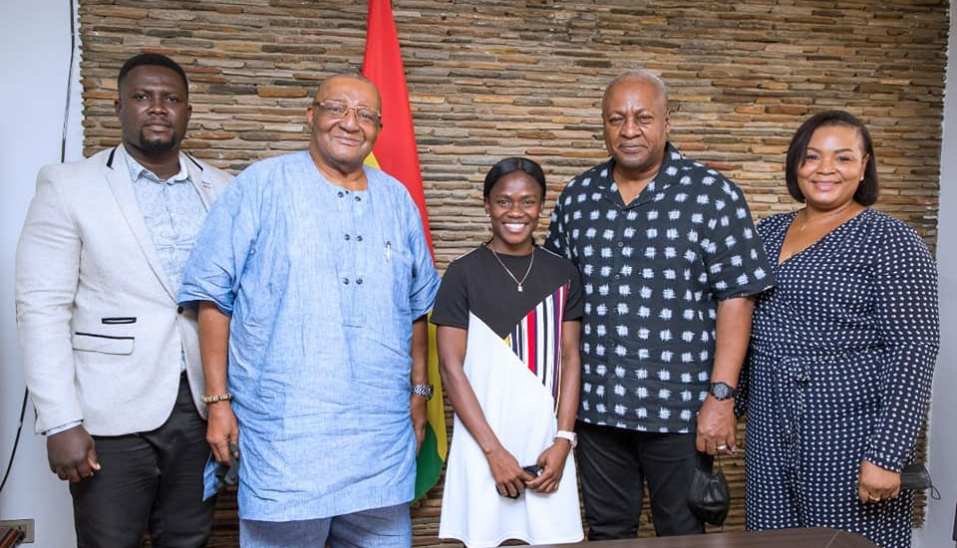 Former President of the Republic Of Ghana, John Dramani Mahama, has asked the Ghana Athletic Association to return to Young Olympic gold medalist, Martha Bissah the money given to her after being the first Ghanaian to win an Olympic gold medal after running a lifetime best and a new junior national record of 2:04.90.

The athlete snatched victory in the 800m final at the 2014 Youth Olympics in Nanjing, China.

Former President, John Mahama in a meeting with Martha Bissah and her team today, insisted that the Ghana Athletic Association needs to refund the money given to Martha and should call off the ban given to her.

The 24-year old attracted the ban over supposed false allegations she labelled against the country’s athletics regulatory body.

Martha Bissah and her camp accused the GAA of extortion while working on a scholarship for her to the United States following her gold medal-winning feat at the 2014 Youth Olympics in Nanjing.

The Professor Francis Dodoo-led Association had suggested to Martha and her family to keep the Ten Thousand Ghana Cedis (Gh¢10,000.00) given to her by the former President for her airline ticket following a private initiative made to secure her a scholarship to one of the US institutions.

This requirement did not go down well with the young athlete’s camp thereby, propagating it in the media.

Bissah at the meeting appealed to the former President to intervene and have her ban lifted.

She explained to the leader that she was banned because she had raised concerns over the gift the former President gave her.

Mr. Mahama in his response expressed disappointment and wondered why the athlete was treated in such a terrible manner.

He asked them to lift the ban and give the athlete all outstanding cash from the gift she received.

Mr. Mahama, in 2015, heaped praises on her for bringing glory and honour to the nation for which he presented a personal gift of GHc10,000 to the young Olympian.

Mr. Mahama said he watched the historic race live on television, adding, “this is one race I will want to watch over and over again.”