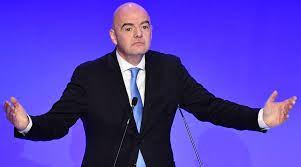 FIFA President Gianni Infantino has called for the release of international players for the upcoming FIFA World Cup qualifiers. FIFA released an official statement after Premier League teams agreed not to release players for upcoming international matches in nations on the UK’s “red-list.”

Almost 60 Premier League players were scheduled to go to nations on the red-list for internationals in September, and doing so would have obliged them to quarantine in a hotel for 10 days upon their return to the UK under the government’s Covid-19 restrictions.

If players had traveled to red-list nations and returned confined for 10 days, they would have missed two Premier League match rounds, a UEFA club competition matchday, and the third round of the EFL Cup.

Below is FIFA’s full statement:

“We have faced global problems together in the past and must continue to do so in the future. The release of players in the upcoming international windows is a matter of great urgency and importance. I am grateful for the support and cooperation from many stakeholders in the game during this challenging period.

‘I am calling on a show of solidarity from every member association, every league, and every club, to do what is both right and fair for the global game. Many of the best players in the world compete in leagues in England and Spain, and we believe these countries also share the responsibility to preserve and protect the sporting integrity of competitions around the world.”