Feature: Takyi must not cross over to professional boxing now 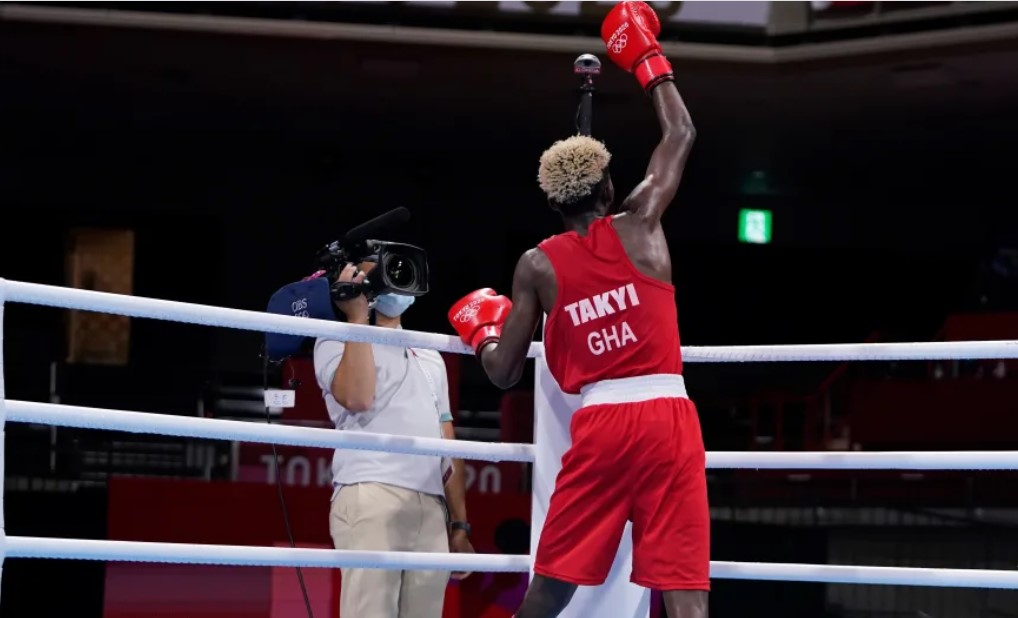 It’s exciting following the debate on whether Ghana’s bronze medalist at Tokyo 2020, Samuel Takyi stays at the amateur boxing level or should cross over to professional boxing ranks after his exploits in Japan.

Those supporting the young pugilist’s decision to leave amatuer boxing ranks after success at the Olympics Games in Tokyo seem not to be convincing at all.

They have only expressed their perspectives pregnant with emotions and unrealistic caveats that are not underpinned by any logic and scientific analysis.

The voices that kept drumming in favour of young Takyi to remain calm at the amateur boxing ranks for the time being, seem to offer realistic perspectives taking into consideration the boxer’s welfare, career life cycle and ability to stay longer at the pinnacle of his professional career if only he takes his time to go through the career growth process.

Obviously, the ongoing debate must help the young boxer and his handlers to pick and choose the best decision to shape his boxing career.

t’s very important we take into consideration our past history when any time we endeavour to critically analyse issues concerning our boxers because we live in a country where there is NO proper mechanism to help protect and guide our young boxers to go through the meal as we see in other jurisdictions.

Boxing is one of the most difficult individual sports in the world and thus much is expected of stakeholders to help protect boxers at all times.

One critical component of protecting our boxers is to guide them through the laid down career process to enrich themselves with all the needed qualities that can keep them a bit longer in the sport.

Ghana has produced ten(10)world champions spanning from the 70s to date. Can we chronicle these events and analyse how they (former champions) catapulted themselves into professional ranks?

These great former world champions were drafted into professional boxing based on different circumstances.

And so comparing of ages and seasons can’t be used as a viable variable to determine Takyi’s decision.

All our former world champions have individual unique mode of entry into professional boxing thus we need to be mindful of the comparative analysis.

Apart from Azumah Nelson who defended his world titles for a solid ten years, none of the remaining nine boxers got closer to that record.

If you consider the title drought gap between DK Poison and Azumah Nelson, Azumah Nelson and Nana Yaw Konadu, Konadu and Quartey/ Kotei, Quartey and Agbeko you will see a huge lacuna of inconsistencies in how we produce world champions.

Thankfully, Joseph Agbeko who came through in 2007 and Joshua Clottey in 2008 managed to close the gap for the likes of Emmanuel Tagoe, Issac Dogboe and Richard Commey. The unanswered question is why are we not able to defend our titles for a long period of time like Azumah Nelson did?

Samuel Takyi travelling to Tokyo without putting in place any plan for his future in boxing may undoubtedly attracted such an interesting debate.

In other jurisdictions,Takyi would be guided by the State (national policy) through his welfare, training, motivation and management to help him grow in the sport before making any decision to turn a professional boxer.

My take on Takyi to not cross over to professional boxing is simple and short.
He’s encountered by a different season that calls for proper management, planning and strategy before a major decision could be taken on his career.

The comparative analysis by some former world champions and pundits must be reconsidered because the periods are not the same.

I am personally impressed with our three boxers who represented our dear country at the Olympics regarding their determinations but not too impressed with their techniques, defence, ring generalship and accurate punches.

These young boxers need to get back to their various gyms and work to refine their individual artistry to help shape their career growth than to think of moving into professional boxing with unrefined boxing artistry.

Young Takyi must not be allowed or forced to take any decision of his own now. The young man needs time to take a second look at himself as an athlete and device a way to ensure great success in his career whether as an amateur or professional boxer.

As a country, I think it is about time to establish a national boxing academy supported by boxing gyms to help regulate and manage our boxing talents for the benefit of all.

We need to develop a proper mechanism to help shape the transition process of our juvenile and amateur boxers to the professional ranks.

Countries with proper amature boxing development plan, keep boxers at amateur level for a specific period of time to provide them with shelter, feed them, get them stipends and organise more fights for them to build their records before thinking of crossing over to professional ranks.

*The writer, Mohammed Amin Lamptey is the Communication Director of Ghana Boxing Authority